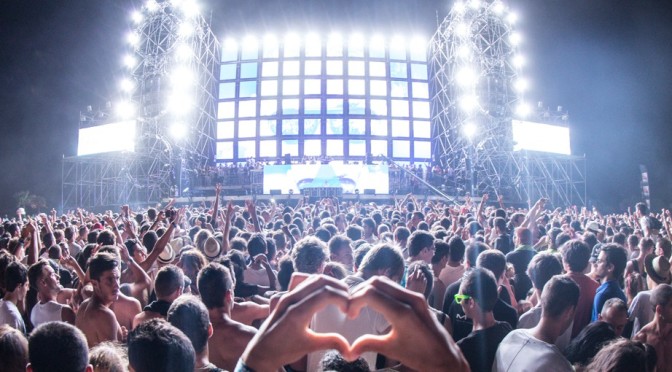 Picture yourself at a kick-ass festival. You’re queuing to get as close as possible to the stage because your favorite band is about to make history. But which queue is the fastest? And where are the closest and quickest bathrooms if the beers you’ve been enjoying need a way out? And how can you get a healthy snack whilst on your way to the next gig? Now imagine taking your smartphone out and getting answers to all these questions (and more). The future of personal navigation is here and it’s called MoveIT. In a nutshell, MoveIT will offer you the same navigation and browsing experience you know so well from Google maps, but will take that experience indoors to train stations and shopping malls and to large scale events such as festivals and fairs. It will answer all questions on the spot which begin with ‘where is…’, ‘how do I get to…’ and ‘what is around here’? Moreover, it will know where it’s busy, what to avoid and where the coolest places are. The best thing is that all of this functionality comes for free to anyone with a smartphone. All you need to do is download the MoveIT app, have it running in the background and it will go to work for you once you get close to a MoveIT enabled location you’ve selected. How does the magic happen? The app works on two levels, a quantitative and a qualitative level. The quantitative level simply aggregates tracking data from the sensors in your smartphone and sends that to the servers of MoveIT. The servers will then work out where you are, sparing the CPU of your phone the hard work and saving precious battery life. When you subsequently open the app and ask for directions, those will be sent back to you straightaway as the layout of the venue is known to MoveIT. Moreover, as the server performs this task for many users, the app will know where it’s busy and where it’s not. This way, you’ll know for instance in what part of the train you’ll have the best chance of finding a seat and which entrance will get you to the stage the quickest. And don’t worry, all tracking data will be anonymous. END_OF_DOCUMENT_TOKEN_TO_BE_REPLACED

As the labor market is subject to a number of significant changes, an ongoing process which has been set in motion many years ago, employment relationships are becoming increasingly flexible. In the Netherlands, as in many other countries, this has given rise to labor phenomena such as flex-working, part-time contracts, freelancing and self-employment. Either as a cause or an effect, this has also seen the utilization of fewer unlimited employment contracts (CBS, 2012). From the perspective of the employee this either means more flexibility and responsibility (glass is half full) or less security and stability (glass is half empty). Without wanting to get bogged down in a discussion about the desirability of this situation, I’d like to turn your attention to a potential and partial remedy for those who feel the glass is half empty.

END_OF_DOCUMENT_TOKEN_TO_BE_REPLACED

With a US based turnover of close to $15 billion in 2012 and growing (The NDP Group, 2013), there is no denying that the gaming industry, sometimes referred to as the interactive entertainment industry, is booming. However, as the alternative title of the industry indicates, gaming as a concept is diversifying. So where is the industry going? Whereas video games started out in arcade halls and on consoles with titles such as Pong and Pac-Man, they slowly made their way onto domestic computers and stereotypically became the domain of pubescent boys and young male bachelors during the 90’s. Although the term ‘gaming’ still conjures up associations with Return to Castle Wolfenstein and triggers discussions about the effects of interactive violence following the Columbine high school massacre, today it is no longer limited to this particular market.

Three revolutions have since changed the foundations of the gaming market. Firstly, the rise of the internet has not only networked people and information, but has also socialized gameplay, giving rise to online communities of players associating and interacting. Presently, network dependent gaming ranges from traditional first person shooters to far more social games such as RuneScape. Secondly, with the introduction of the Wii in 2006, Nintento broadened the demographic reach of the console market by including new functionalities, turning interactivity into a physical activity and thereby making gaming a family pastime and a fitness choice (Farhoomand, 2009). In other words, by changing how people were gaming, they changed who were gaming. Thirdly, with the proliferation of smartphones, gaming was freed from the living room, the television or the pc. As games are now available at the flick of a thumb anywhere and anytime, traditional consol or pc based game developers are losing profits as location has become irrelevant (Edwards, 2014).

Of course, this is not the end of the line for game development as another revolution is just around the corner. Appealing as it may seem to consider virtual reality the next logical step, this will not change the way in which we play games, where we play games or who is playing games. Possibly, the next big thing is augmented reality gaming, specifically in the form currently embodied by Ingress, a release by Niantic Labs, a Google subsidiary (Niantic Labs, 2014). The revolutionary idea is that location is no longer irrelevant as with other mobile games but has taken center stage in the gameplay design. Players need to interact with their augmented environment as the game takes the GPS location from the phone to reveal a world unseen with the naked eye. In essence, Ingress is a worldwide execution of a ‘capture-the-flag’ scenario with only two teams, blue and green, where the player must walk, phone in hand, from location to location to interact with a real-time online world. Furthermore, the game is designed in such a way that cooperation is necessary to utilize all the options of the game thereby stimulating the creation of both digital and real communities as players physically need to come together. Lastly, Niantic doesn’t decide where the ‘flags’ are planted but solely uses player input to decide how the constantly evolving augmented environment will grow, deepening the involvement of players with their surroundings. As such, Ingress ticks all the boxes spelled out by the previous changes in the gaming industry. It is very social, it is a physical activity and it is happens outside the living room, not by chance but even on purpose. The results are astonishing as the addictive game has drawn in a vast player community with people from all walks of life meeting in their free hours to ‘capture flags’ and have some fun.

What is more, Ingress wasn’t adopted on a whim. For more than a year the game relied on an invite only system with limited invites and waiting lists for new prospective players while the game was in its Beta or testing phase. Through word-of-mouth, the innovators and most critical users were drawn in, in an effort to empower this community of earlier adopters to contribute to improvements to the gameplay. The creator of Ingress was given full support by the Google top brass and during major gameplay events, Google VP’s were flown in to talk to the players and ask them what they could do to improve the experience, empowering the community (Vargo & Lush, 2008). So why go through all this trouble? The game is free of charge which draws in many players, but there is no revenue stream and there are no advertisements. The only value created for the players is fun, albeit very good and innovative fun. By drawing in a loyal community of early adopters and innovators, Google was able to release the game in a fully playable mode and also overcome ‘the chasm’ in the Technology Adoption Lifecycle by heaving reached a critical mass of players before releasing it to the general public (cf. Goes et al., 2014). In doing this, Google was the first (and so far most successful) mover onto the augmented reality gaming market, a market which is for now limited to their own operating system Android. Having established this strategic bridgehead, they’ve indirectly strengthened the strategic position of their operating system and created a new type of platform for gaming (Eisenmann et al, 2006).

Edwards, C., (2014). How Flappy Bird Is Ruffling Feathers in the Gaming Industry. Bloomberg. Accessed on April 11, 2014 via http://www.bloomberg.com/news/2014-04-07/how-flappy-bird-is-ruffling-feathers-in-the-gaming-industry.html

Niantic Labs, (2014). Ingress. The world around you is not what it seems. http://www.ingress.com

What is better than the satisfaction that comes with completing a run? Of course that needs to be sharing that experience with friends! So what if your schedules don’t match or you’re not even in the same city? Given the rapid advances of smartphone technology, a bunch of clever programmers have been working away diligently on a solution to this very problem. Proudly topping the popularity charts in an appstore near you is RunKeeper. I should actually backtrack a little and start by saying that what the app originally set out to do is keep track of your outdoor fitness activities, whether they were walking, running, biking or canoeing, by using your phone’s GPS module and letting you know, on the fly and afterwards, how far and how fast you went. All activities could be stored and compared later on to inform you of any progress you might be making, delivering the science of fitness management into the palm of your hand (for a comprehensive review of the basic functions, see Vogel, 2013).