After my parttime student job at a large beer brewery, I started an internship at a B2B company selling plastic pipes, were I was responsible for the online part of their digital transformation. One of the challenges that I faced, was the content presentation on the website. We had four different types of customers. Customers which were all very different from each other and that varied from Joe the plumber to the boardroom members of larger building companies. Using the company website as a marketing tool hereby became quite hard, since I could not present marketing content on the homepage that was relevant for all of these different customers. At the time, I was not aware of a simple and relatively cheap solution for this problem, but last week I was confronted with a company that created a tool which could solve just that.

This company was Hubspot. World’s largest inbound marketing and sales platform (Hubspot.com, 2015) and provider of a marketing automation tool which gives answer to the what, when, and how question. Like I said, people have different needs in what sort of content they want. Presenting the same content hereby could decrease the effectiveness of the marketing activities on a company website, but still a lot of (mostly small and medium size) companies do not offer different content for different customers. Visitors could also be in very different stages in the sales funnel. If a potential customer is orienting what sort of product to buy, this customer does not want to be bothered by very specific product advertisements. The format how people want their content could also vary among consumers. Some people want to know every detail, while others are primarily interested in the bullet points of content and hereby the optimal format in which the same sort of content should be presented could differ among customer as well.

But what does the Hubspot tool deliver that overcomes these problems? How could the Hubspot tool provide even smaller companies with the almost the same a level of website personalized website adaptability that was formerly only achievable by the bol.com’s of this world? The Hubspot tool gives companies the ability to bundle of all of there online activities togethers and by letting these companies build a database that watches and listens to all of what your online customers are doing (Halligan, 2012). This database data could then be used to personalize company websites for different their customer groups. Customer groups which exist of consumers with the same sort of online behavior.

If I would have implemented this during my former job, I would not have had the content trade-off’s,  because I did not have to present all customer groups with the same content. Instead, I would have made four different content variants, belonging to the four different groups of customers. Joe could hereby enjoy his Brazilian product babes, while mister CEO would be presented with high level CSR stories and case studies.

Click here to read the former post of this author: “Marketingfacts, watch out, the students are coming” 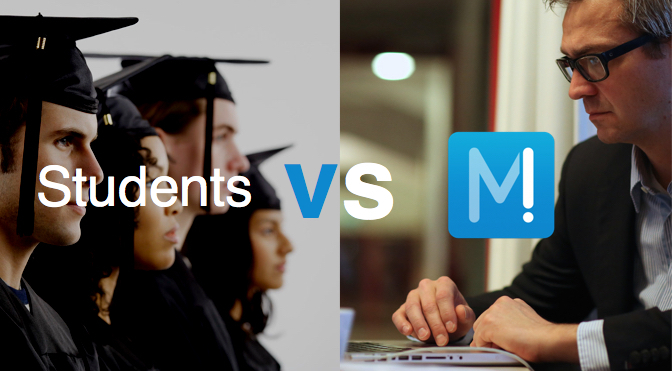 We’ve got the content, we can create visibility, let’s go make this blog big!

If you are reading this blog post, great chances are that you are a student at the Erasmus University. If you are not, welcome to the CCDC website, where content is created by students and mostly written by students as well. The idea behind this website is to make long and extensive articles accessible and to highlight the USP’s of consumer driven companies and online networks, like Created on Friday and Skillshare. It is meant to be a learning tool, but if you scroll down the homepage, the generated content could also be compared to that of an online marketing platform, like the Dutch website Marketingfacts.

If you compare the CCDC website to Marketingfacts, two big differences appear. First, the content is created differently. In the case of Marketingfacts, the content generated by a team of professional bloggers (Marketingfacts, 2015), and in the case of the CCDC website, this content is generated by students. Second, the incentive of the content creators differ. Were the professional blogger may want to share his or her knowledge online, the student blogger will be obliged to create content, since they will be graded for the blog posts. That said, traditionally articles created by students will not have a purpose after the articles were graded. Now, their created content will live on as blog posts, what can cause for online visibility, next to serving the student’s graduation.

So why is this proposition, the student driven online marketing and C2C platform, currently so interesting? Why am I dedicating my blog post to a online platform which nowadays only can attract 1000 up to 2000 views a month? Because there are two things which make this platform unique compared to a more traditional online (blog) platform: secured content delivery and worldwide university connections. Since students currently are obliged to create articles, the amount and subject area of content can be determined by the professor, an advantage which is hard for a normal platform to copy. Besides, in-between universities and professor’s alliances are easily made. Professors from multiple disciplines and universities could join, and hereby add students to the creation group, which makes increasing the amount and diversity of the content easily done. These unique advantages make a quite interesting case for becoming a large online platform.

So, if the professor of this CCDC course decides to make this blog to go big, what should he do to control content quality and to create online visibility? Again, let your students do the work. Visibility can be created by individual sharing of the content on social media. Of course a platform account can start sharing the posts, but a large group of students together can cause for even a greater amount of views (LinkedIn, 2015). High quality can be maintained by letting the students rate the newest articles (Hu et al., 2009; Tsekouras, 2015). The ones with high rates stay on the home page for a certain time, making sure they are written, and the silly ones die in silence, so that they will not harm the platforms reputation. All-in-all, the ingredients are there, now we have to execute it right. Marketingfacts, watch out, the students are coming..

Click here to read the former post of this author: “Can we all start drinking beers all day long?”

To cover the inevitable expenses of the Dutch student life, I worked as a online marketeer at a large beer brewery for two years. My main task was to maintain and manage the online community of the firm, which consisted mainly out of people that followed the company social media accounts. Within this online community I pushed content in the form of company posts towards our community members, posts with which I tried people to convince a certain product was attractive, or posts telling our people that our new campaign was cool. But what I did was wrong. Instead of my strong content pushing focus, I should have engaged our community in engaging..

In the last decade, the term “engagement” has been extensively used in marketing literature. But while this term has become more popular, it never has been really been defined or differentiated from terms as “participation” and “involvement”. So when Roderick Brodie and his friends (2013) decided to write an article about virtual brand communities, they choose to focus on the consumer engagement in these communities. What really defines this customer engagement, and how could this customer engagement be created?

They started with the question how to theoretically define consumer engagements, since this was never really done, and came with the following comprehensive definition: “Consumer engagement is an interactive, experimental process, based on individuals engagement with specific objects (e.g. brands, organizations), and/or their community members.” After defining this consumer engagement, they start examining what was needed to create this consumer engagement in online brand communities. A netnography (Dhiraj, 2011) was done were 427 blog posts consisting out of 56.804 words were analyzed. Eventually, Brodie et al. (2013) came to the following practical conclusion: companies must start “engage in engaging”, they must form their brand communities in such a way that consumer interaction determines what is happening.

This is because according to Brodie et al. (2013), the modern consumer does not want “sales talk” from a company account, instead it wants “non-commercially” driven reviews and comments from peer consumers. This may sound like the online marketeer should lose the entire control of their online communities, but that should not have to be the case. In the end, it is mainly important that the consumers perceive the community to be “non-commercially” driven. This causes for a new challenge for the online marketeer: creating environments that are being perceived to be controlled by the consumer, but that in the end cover subjects that engage customers to buy products or services from a company. If this is hard? Yes it is, and if you are not convinced, take a look at this McDonalds example: