For most of us, Instagram is not only a way to share and post filtered photos of important subjects of our life like Sushi ate for dinner, friends’ cute cats and dogs as well as selfies, but also a procrastination tool to enjoy the eye candies from internet celebrities, i.e. posted pictures, meanwhile some are making real cash out of their influential photos. In case you are curious on how to make money like an internet celebrity, hope the following tutorial can help and it all comes down to a combination of product placement, endorsement and followers who gradually become consumers as well, since they are the target market of the internet celebrities they follow.

According to Forbes Magazine, Kylie Jenner who ranks the second on 2016’s Top-Earning’s Reality Stars list, earned $18million in 2016 (Robehmed, 2016). Among which, nearly 20% of the income came from endorsements on social media for promoting other brands’ products. She shilled for at least eight different brands through her Instagram page. It is said to have your product shown on her Instagram, each picture charges at least $300,000 (Lester, 2016), due to the fact that these internet celebrities have considerable audience to broadcast to and easily gather at least one million “likes” on Instagram. The actual advertising effect is also surprising. The year before a noteless make-up brand (Nip Fab) reached out to Kylie Jenner with a hefty bonus. Now that brand is gaining its popularity with a boost from her Instagram endorsement, the market value of the company has reached $100 million (Lankston,2015).

Another example is from Selene Gomez who sits on 110 million followers on Instagram. Last year she broke a record of asking $500,000 for an endorsing photo from Coca-Cola. The picture is such a huge success that harvest of 6.5 million “likes” on Instagram immediately, which became the most “liked” Instagram in history.

Kendall Jenner, sister of Kylie Jenner, who also attracts almost 76 million followers on Instagram, was spotted wearing a certain brand clothes for a long time when appearing in front of paparazzi or casually shot off pictures with the brand’s clothes on and posted on Instagram. While she was paid to by this newly set-up, yet no-fame Australian brand. Most importantly, sales revenue of the brand rocketed thanks to her implied efforts. Consequently, by partnering with Instagram influencers that have thousands or even millions of followers, brands can reach loads of consumers with a single post. Nowadays, many marketing agencies have turned to devote to pairing Instagram accounts that have sizable followers with companies looking for advertising or exposure aiming for certain target market. 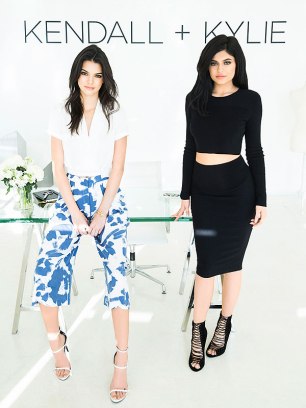 Seeing their promotion of other products sales went so well, Jenner sisters rushed to develop their own clothing line, but this brand is quite controversial. Followers who bought complained that regardless of style, the material or cutting are inferior, nevertheless the retailer prices are not cheap.

The economy behind it

Concerns are often raised whether buying products that recommended by internet celebrities is trustworthy or not as products that internet celebrities promoting are not supervised by any regulation as long as they are complied with law. Moreover, they do not have clear responsibilities for consumers who made purchases as a result of their product placement post. Nevertheless, these influencers still make certain impacts on their followers to help either brand build their business or discover their own selling opportunities.

Given the fact that internet star’s every move comes with commercial incentives driven by huge business interests, it is up to followers to identify contexts and contents on Instagram at the moment. Interestingly, followers are willing to invest their time and attention in the absence of interaction with the influencers, as Bateman et. al (2011) discovered that continuance community commitment (i.e. followers have adopted the habit to check on their following influencers’ posts) and affective community commitment (i.e. followers find intangible rewards as browsing pictures are enjoyable) were the form of commitment that have stronger impact on participants’ reply-posting behavior except that normative community commitment in the context of Instagram does not make every participant obligated to post pictures. Therefore the last piece of advise to become Instagram celebrity is to keep followers come back for more and new content of pictures and to sum up, as the internet celebrities mentioned above, they have leaned to what their audience is asking for and show them what they want, and they will become loyal.

Lankston, C. (2015). ‘Using Kylie in a campaign was risky, but it paid off’: Beauty guru reveals how celebrity fans like Kylie Jenner and Elle Macpherson helped her to build a $100 MILLION brand. Available: http://www.dailymail.co.uk/femail/article-3284503/It-s-secret-ingredients-Skincare-expert-loved-likes-Kylie-Jenner-Elle-Macpherson-reveals-secrets-100-MILLION-beauty-business.html. Last accessed 8th March 2017.

Morrison, L. (2015). How Do Instagram Stars Make Money? Here’s What Goes On Behind All The Valencia. Available: https://www.bustle.com/articles/127110-how-do-instagram-stars-make-money-heres-what-goes-on-behind-all-the-valencia. Last accessed 8th March 2017.

Leave a comment or rate this post, unless you are the “lurker” I am about to talk about.

To be clarified, “lurkers” refers to members who simply visit online communities to acquire knowledge and information without active posting behaviors. On the contrary, those who actively post messages are referred to “posters”, who could be seen as more psychologically connected to the online community than lurkers (Hicks et. al, 2012). As it’s an emerging rule of thumb that suggests that only 1% of the users of a user-generated platform actively create new content (i.e. poster), while the other 99% of the participants only lurking (i.e. lurker).

Even though the majority of the members in online communities are silent members who mainly browse and search the online content created by posters, lurkers are still considered as indispensable “consumers” of online communities. Therefore, questions are raised to the relationship with online community support, member relations, and commitment. Yang et.al (2016) conducted a case study of a typical online community in China with seven million members by the end of 2015 – Pinggu.org, where people can exchange their knowledge or seek help regarding economics, management, finance, and statistics. demographic information about its members and each member’s posting history are gathered to test the relationship between perceived online community support, member relations, and commitment.

The authors suggested a theoretical framework (Fig.1) to the question of how perceived community support shapes member commitment in online communities based on the theories of commitment and organizational support and explored how these effects are moderated by members’ social relations in terms of posters and lurkers. (Yang et. al, 2016) The phenomenon of lurking has been often overlooked in the past literatures, while the paper found out that perceived recognition for contribution and perceived freedom of expression were key to lurkers’ commitment to the community, though the commitments for posters would be increased by perceived support for member communication. 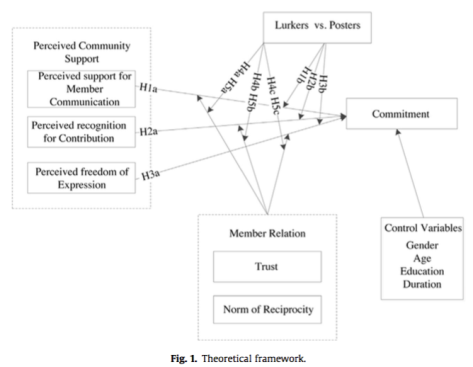 Besides, this research also proposed the sense of trust and the norm of reciprocity as moderators between perceived community support and commitments. In other words, online communities’ manager could apply this knowledge to drive more commitments from both the poster and the lurker to online communities, that is, the sense of trust in the context of online environment would strengthen the effect of the felt expression freedom on lurkers’ online community commitment. On the contrary, the norm of reciprocity did not moderate the effect of perceived freedom of expression on commitment for the poster.

First of all, given the fact that most of the past studies on the effect of organization support on commitment have been conducted in the offline context, Hence, the paper was making effort to fill the gap of the applicability of this effect in online user-generated platforms with applying both commitment theory and organizational support theory to the online environment.

Nevertheless, in the research, the effect of perceived recognition for contribution on the commitments of lurkers were not elaborated to explain the mechanism of the lurkers’ commitments, which would also benefit the online communities if they could better facilitate the lurker’s preference while increasing their commitments, keeping in mind that lurkers are an indispensable part of online communities.

Not a good cook? Don’t know what to eat for dinner? Too busy to buy fresh vegetables and meats? Well, the solution is now delivered at your doorstep.

Meal-delivery Services are surging in popularity, retailers like Blue Apron, Hello Fresh and Plated surface to deliver fresh vegetables and meats to create your own meals at home with their well-designed recipes.

As a leading meal-kit service provider, HelloFresh, a Germany-based company, is founded by MasterChef finalist Tom Rutledge. It has already made its appearance in several Western European and North American countries, as well as Australia since official operation in December 2011. Tom Rutledge’s agricultural heritage inspired him to offer this farm-to-table experience for busy commuters, combining fresh, quality ingredients with simple cooking ideas. According to its website, HelloFresh has shipped over a million meals per month in its covered area. Not to mention, the company more than quadrupled sales last year to 70 million euros. Moreover, it is a purely independent business model that relies on large-scale customer fulfillment center for centralized storage, picking up and distribution.

You start to order meal-kit box at least one week in advance. Every week a box of ingredients for the entire week are packed and delivered to you. Essentially every meal will be equipped with the necessary proportioned food in insulated packages, even spices such as curry powder, rosemary and ginger will be contained, along with recipe cards, which allow users to replicate the dishes by simply following the detailed instructions to prepare and cook. Besides, its membership plan varies from two-person to family-size plan with a compact three-meal or five-meal per week, while Hellofresh also supplies separate vegetarian boxes as well as fruit boxes for special dietary requirements. 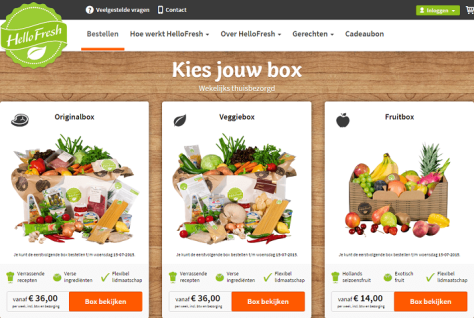 Even though meal-kit services are unlike restaurant delivery that you still have to prepare the meals, you are saving loads of time from grocery shopping and recipe searching. More importantly, given the fact that Hellofresh will only serve right amount of what you need for specific recipe, there will be no food residual to worry about.

Cooking with fresh ingredients is what Hellofresh is promoting to their users. As their dedicated team of chefs and dietitians create recipes on a weekly basis to ensure that the meals they prepared are balanced and wholesome. The default recipes have always been considered as HelloFresh’s one of the most critical competitiveness. When speaking of designing recipes, Hellofresh lacks information about users ‘tastes or preferences, therefore, it decides mass default recipes which apply for all users, without taking users’ individual preference into account (Goldstein et al, 2008). However, Hellofresh has covered seven countries across West Europe, North America and Australia, it adjusts recipes according to geographic custom. Nevertheless, HelloFresh also forces its users to accept set meals for a week without actively engaging users to pick recipes. On the other hand, default recipes may increase the risk that HelloFresh users will skip weeks of subscribe in case they don’t favor the food.

One thing worth mentioning is that HelloFresh partnered with Jamie Oliver in 2015, a British celebrity chef, to design recipes aiming to stress the importance of healthy and fresh meal other than food takeaway. Their collaboration delivers users with a wider variety of alternatives yet creative recipes and encouraging them to cook from scratch while enjoying their thoughtful recipes. 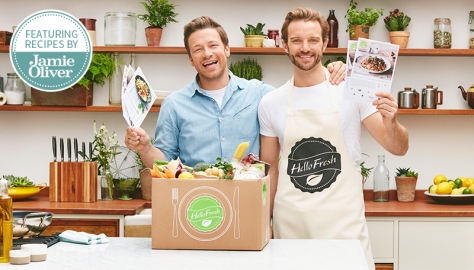 In light of HelloFresh’s large distribution network, huge expense is inevitable. In order to take advantage of their idle logistics, improving transportation efficiency and reducing the cost of warehouse, Hellofresh could consider to expand its customers base to wholesales like supermarkets, cafés and snack bar to deliver fresh uncooked food. Both the company and the third party could benefit from open logistics and gain profitability. Additionally, not only to offer adults’ meals, Hellofresh could also target at the market of infant food for time-pressed parents wanting to provide their babies with notorious and freshly prepared meal. 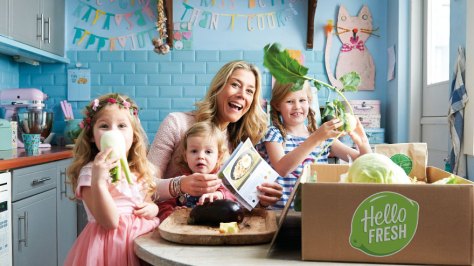