Always dreamed of being one of the coaches of The Voice or X Factor, but your lack of musical talent is the thing keeping you from this? Or have you tried breaking through in the music industry, but has your beautiful voice not yet hit the masses? In that case the platform ‘My Major Company’ will enrich your life. This platform gives everyone the opportunity to help an artist produce his or her album, eventually resulting in the artists being able to break through in the music industry.

My Major Company involves consumers in the selection and the eventual success of new and upcoming artists, since 2007 and reached their peak of contributors in 2010. The website portrays an increasing amount of musicians, containing detailed information about their music and themselves. (Ple et al., 2010) Moreover, consumers can listen to work of musicians, help them with funding and comment on their songs with strategic decisions, development or appreciation. This makes this customer-integrated business model a combination between a community driven business model and a crowdfunding business model. When a project is funded enough the albums will be produced, distributed and advertised, which can be a dream come true for many artists. As the winning amount an artist received from backers was €150.000, which can be seen in the following figure. 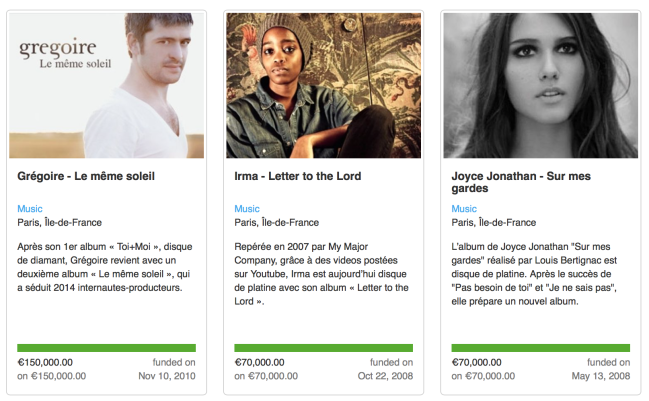 Using crowdfunding as business model reduces the importance of traditional geographic constraints for consumers, but gives access to funds and avoidance of financial risk to the musicians. (Mollick, 2013; Matinez-Canas et al., 2012) Moreover, for musicians this is positive because pooling contributions of crowdfunders, and thus redistributing risk, opens up possibilities to release records that would else have never been published. In return backers in the platform will be paid 30% of the net income generated by artists they funded. (Ple et al., 2010) However it has been studied that there ought to be a significant amount of backers, making repeated contributions in order to make the crowdfunding campaign a succes (Galuszka et al., 2014). However, there will always be the disadvantage that rivals will be able to copy ideas developed on the platform (Ple et al., 2010).

Having a community on a crowdfunding platform can be very beneficial as this encourages new customers to join, increases quantity and eventually the quality of the product offering (Ple et al., 2010). This shows that not only the financial aspects are vital, but also the social network ties between potential backers and the musicians in this business model have been shown to be extremely important in crowdfunding business models (Agrawal et al., 2012; Galuzka, 2014). Mollick (2013) adds to this the dynamics of success and failure lies in personal networks and project quality. Finally, this business model gives the opportunity in an early stage to identify the actual target audience, for instance the songs people listen to within this business model (Matinez-Canas et al., 2012). Nonetheless, it is found that 75% deliver products (in this case albums) later than expected by the backers (Mollick, 2013). Therefore it is of great importance that founders will be encouraged to set appropriate goals and careful planning. Moreover, outsourcing the firms’ control can be negative due to non-relevance posted within the communities such as spam (Tsekouras, 2018). This might be problematic for firms, as this might not comply with the institutional arrangements set.

The combination of a crowdfunding and online community business model has proven to be very beneficial for companies, however, for backers this can be of high potential too. Its value proposition lies in of making music your business concerns a broad amount of stakeholders interested in the music industry. By having a say in what music will be produced and helping musicians by funding the and giving them advise, backers’ perception of the music industry will change completely. For just €10,- it is possible to help an artist break through in the music industry. However, bear in mind that it is not possible to buy more than 100 shares of the same artist. (Ple, 2010) Even though this business model has not expanded their business in the last years, in my opinion, this business model was a pioneer of communities and crowdfunding in the music industry and should therefore not be forgotten.

Letting users generate designs, also known as crowdsourcing, is the method when companies ask consumers to develop new ideas for products, slogans or specific problems. One of the pioneers within the field of asking ‘the crowd’ to contribute new products is the LEGO ideas platform. Here consumers can share their idea and gather support, hereafter LEGO will review all ideas and perhaps develop this particular idea into a new product.

Crowdsourcing has several benefits for companies, such as the ability to solve problems, generate ideas, outsource tasks or use it as information pooling. (Tsekouras, 2018) However, Franke et al. (2006) found that users’ willingness to pay also increases substantially if they are allowed to design their own solutions. Resulting in a sales increase for the companies. The paper by Berg Jensen et al. (2014) studied which data can be used to help a focal producer firm to reduce its workload in the selection phase by predicting which user-generated designs it would most likely perceive as commercially attractive.

The study focused on the lead-users within the LEGO user community and their contributions to LEGO ideas. Lead-users were defined in 1986 by von Hippel as: “the members of a user population who get benefits of obtaining a solution to their needs and are at the leading edge of important trends in a marketplace.” Franke et al., (2006) elaborated further on this and found that lead-users tend to be the ones that come up with the most commercially attractive ideas in online communities. The study screened lead-users for input concerning relevant predictors and corresponding theories. It became apparent that one could distinguish between characteristics of the designs that lead-users tend to produce and the individual characteristics of lead-users.

Berg Jensen et al. used 1799 designs from 116 user-designers to find whether firms can anticipate on the most commercially attractive ideas. The three prominent variables that were used by a focal producer firm of such a community for filtering of promising user-generated designs were:

The review of whether the focal producer firm perceives a user-generated design as attractive was done by measuring the assessment of two professional LEGO reviewers. These reviewers were trained by LEGO to find which design would be appealing to large market segments. However, regarding the data collection it is questionable whether this outcome is generalizable and attractive for other firms. As just two LEGO employees checked the designs, this could be highly biased and might have been checked twice or perhaps added a group of lead-users.

The variable shows products that are rich in appearance and are therefore of great consumer value compared to alternative and competing designs. In this study the complexity is the number of pieces utilized in a given design. This also results in differentiation from competitors (Baldwin et al., 2006). The authors found an inverted U-shaped relationship between the complexity and its perceived commercial attractiveness. However, complexity can also result in higher production and distribution costs, as there is a point in time where the cost dimension outweighs the revenue dimension of a new design. The final turning point was found to be at 3950 pieces, which is highly context specific; therefore it is difficult to infer the application to a broad market of user-generated design platforms.

When a given design has attracted some endorsement from other users who may represent broader market segments this shows the positive community feedback (Baldwin et al., 2006). The authors found highly statistical significant evidence (.05083) that the relationship between the positive feedback received by a given user-generated design within the peer community and its perceived commercial attractiveness was positive. The empirical setting of the study was within a brand community where members have strong emotional attachments with the focal producer firm, which makes it hard for other firms’ communities to find lead-users that are such fanatics of their products.

The intensity of the design activity by a user designer is thus the number of designs generated and posted into LEGO ideas by a user. The results show there is a U-shaped relationship between the intensity of a certain user-designer’s activities and the likelihood that a given design by that user will be perceived as commercially attractive. The turning point turned out to be at a generation of 99 designs in two weeks time. This seems like an extreme amount, however, these types of user-designers are not uncommon in the brand community setting and might represent an important source of innovation.

Even though this study is difficult to generalize for other firms focusing on communities, the findings will help firms that use user-design platforms for physical prototypes, being a very niche market. This study is a first step towards a new web-based marketing research approach that can enable firms to filter vast number of user-generated designs more effectively and efficiently.