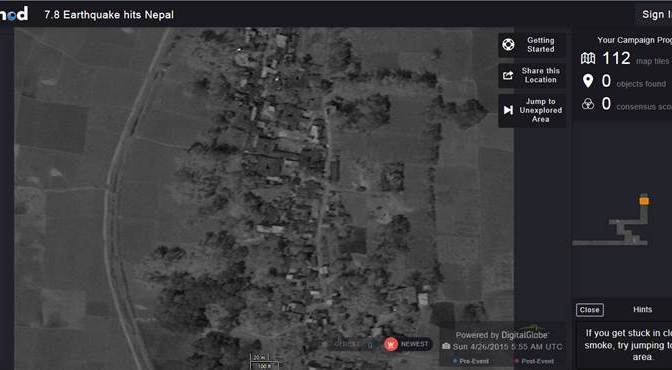 Crowdsourcing is ‘the act of taking a challenge faced by a firm and, instead of asking internal research and development departments to solve the challenge, the firm broadcasts an open call to individuals with relevant expertise outside the firm to become involved in solving the challenge’(Howe, 2006). The recent Nepal earthquake has left ‘thousands in need of shelter in a country little able to cope’ (The Guardian, 2015). According to the Guardian, the region called Gorkha, was closest to the epicenter. Their source claimed that about fifty percent of the houses and schools in this region have collapsed.

The problem for emergency workers now is how to reach the victims of the earthquake.

Tomnod has a few projects where you can contribute, for instance floodings in Chile, a missing catamaran crew and now the Nepal earthquake. Users are instructed to find damaged buildings, major destruction or damaged roads. After a short instruction, you can start exploring map tiles. Some of these are unfortunately cloudy, but other tiles clearly show land. Tomnod keeps track of ‘your campaign’, and gives you direct feedback: it shows you how many tiles you explored, how many tags you made and what your consensus score is (Tomnod.com, 2015). Tomnod collects the tags, and uses a special algorithm to identify interesting locations with maximum agreement of all taggers. According to Tomnod, it is true wisdom of the crowd!

You can use Tomnod without an account. However, Tomnod encourages users to create an account: it helps them improve how they determine overall team accuracy. Furthermore it makes it easier for Tomnod to inform you about new campaigns. On Facebook, Tomnod has over 61.000 likes. The amount of people contributing seems to be a lot higher: according to the Guardian (2014), about 2.3 million ordinary internet users used the Tomnod website to help find the missing Malaysian Airlines flight MH370 in 2014. However, the sad truth is that this campaign was not successful, as the plane was never found. The Guardian (2014) also warns that online crowdsourcing campaigns are sometimes unsuccessful, also referring to the thread on Reddit that hunted down the wrong people for the Boston Marathon attacks, resulting in the names of innocent people trending on Twitter.

Whether this Tomnod campaign will be successful, only time will tell. I do not see much harm in participating (as no humans are hunted down, but damage is marked on the maps). When disasters like this happen, many people feel the need to do something, and Tomnod facilitates us in contributing a little bit of time to help. If you want to contribute, please visit http://www.tomnod.com/

– The Guardian (2015), ‘Nepal earthquake: thousands in need of shelter in a country little able to cope’ by Jason Burke, Kathamandu. 26th of April 2015, last accessed 28-04-2015 http://www.theguardian.com/world/2015/apr/26/nepal-earthquake-thousands-demand-shelter-in-country-little-able-to-cope 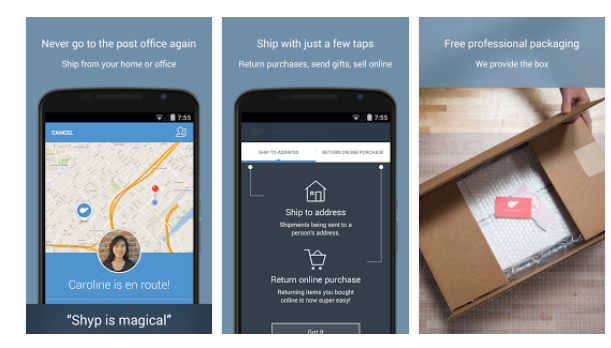 ‘Shipping isn’t easy. No matter who you are – an individual or a business – you’d like to spend less time and less money on sending things to anyone in the world’

This is the value proposition of Shyp in a nutshell. Shyp is an app available for android and iOS, that changes the way you ship your products. Currently, you have to make sure you have the right wrapping products and boxes to package your product correctly. Next, you have to go to a postal office to send your product, where you sometimes have to wait in line for a long time. With Shyp, this is all history. Shyp works in two easy steps: 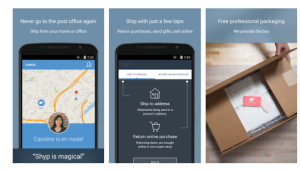 Based on the photo you upload in Shyp, Shyp determines the correct packaging materials to ship your products, and takes care of wrapping the product for you (Shyp.com, 2015). After requesting a pick up, a courier from Shyp will come to pick up your product, and he / she will transport it to a Shyp warehouse. There, your item will be packaged. Next, Shyp will determine which post carrier is cheapest for your package, and will make sure your package is delivered to the chosen service (New York Times, 2014).

Shyp.com promises their customers low costs: ‘We price compare across all major shipping carriers to give you the lowest rate possible.’ Additionally, customers of Shyp pay a 5 dollar fee on top of the shipping charge. Therefore the consumer payoff of Shyp can be formulated as follows: The utility is high since the customer will spend less time and effort on shipping their product (as compared to traditional methods), and on the other hand the consumer pays five dollars for Shyp’s service on top of the shipping charge (and the shipping charge might turn out lower as Shyp compares all carriers for you).

I turn to the institutional arrangements in place at Shyp. Having a bad experience with Kiala.com, I always check the liability of the shipping company I use. Besides obvious terms of service (e.g. including not shipping illegal products and live animals), Shyp includes a clause about reimbursement. According to this clause, ‘Shyp will reimburse you for actual loss of or damage to any shipment whil in Shyp’s possession up to a maximum of $1,000 per shipment or, if less, the maximum amount permitted by applicable law or regulation.’

When reviewing the ratings of Shyp, I find that the crowd seems to be positive: 39/55 ratings are five stars:

To conclude: Shyp has an interesting proposition. Current customers seem to be happy with its service. Time will tell if enough customers are happy with the consumer payoff to make this business successful. Hopefully Shyp.com will continue to expand, so we can try it ourselves and make up if we want to pay 5 dollars to have a hassle free shipment. 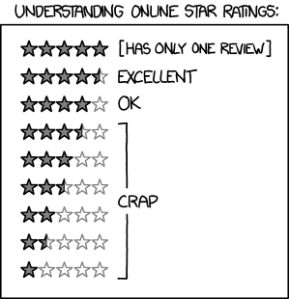 This article focusses on their study on de effect of social commerce on product reputation and sales (hypothesis 1). Amblee and Bui (2011) studied this effect from three different perspectives: Valence (how positive or negative a rating is), the presence of a rating versus no rating and volume (thus the amount of ratings). Interestingly, they do not find a significant correlation between valence of the rating and sales. Amblee and Bui (2011) suggest that this might be due to the generally positive ratings, and thus a low variance between positive and negative ratings. Second, they also find that the presence of a rating is a good predictor of higher sales, as compared to no ratings. Furthermore, they also find a significant correlation between the volume of ratings and the volume of sales.

In their discussion, Amblee and Bui (2011) propose a better scoring system which allows users to score the e-book on different dimensions such as content, writing style and so on. While this suggestion might lead to a bigger variance between ratings, I wonder if it would have a positive effect on sales in the end. Amblee and Bui (2011) point out that the majority of past research on valence suggests that valence is not a reliable predictor of sales. However, by including more ratings to fill in like Amblee and Bui (2011) suggest, you might achieve a negative effect: that customers are no longer willing to fill in the rating. And the importance of the presence of the rating, and moreover the volume is exactly what is found to be so important to spark sales by Amblee and Bui (2011).

Fast forward to 2015. Did Amazon.com change the rating system? I went to Amazon.com and I filtered on short stories and on kindle editions. This is what I found:

Figure 3: Layout of customer reviews of shorts on Amazon.com, 2015.

This shows that the great majority of the ratings is still very high (roughly 84% of the ratings are 4 stars or more).  However, it seems like Amazon has added some space for customers to motivate their rating. Furthermore customers can also identify reviews as helpful, and Amazon shows me the most helpful reviews first. By using this system, Amazon.com leaves it up to its customers if they want to motivate their rating (and spend more time rating a book) or not. What do you think, has the system improved? Do you think it will lead to more sales? Please comment below!