Always wanted to change your house, your garden or just want to switch your interior up, but you did not know how? Arcbazar is the answer. It is the number 1 crowdsourcing marketplace for architectural, interior and landscape design projects and let you crowdsource your projects to over 10.000 architectural, interior and landscape designers from around the world.

Arcbazar was founded in December 1010 by Imdat As, Ana Batista and Halit Ciftci, after realizing that all too often clients could not find an easy and affordable way to find competitive architectural design services, while at the same time, designers had a hard time to connect to clients and use their design talent. Their website arcbazar.com is the first website that holds online competitions for small to medium scale design projects. Their aim is to help their peers, young designers and architects find exciting design opportunities from design conscious individuals.

At Arcbazar, any client can start a design competition. Here you can fill in your title and your project type and Arcbazar will already come up with a list of deliverables that designers should come up with. You can alter this if you need any specific document or if you want less deliverables.  After this basic information, you are asked to describe your project. Arcbazar even helps you with some questions that can be answered in order for the project information to be more complete. Here the project can be described, but also your goals, challenges and specific requests to the designers.  You set the deadline, fill in an award and launch your project. If you’re still in doubt about the project, you have 24 hours of free cancelation.

How should you reward the designers?

The minimum award of your project is given by Arcbazar to make sure the awards are fair to the designers. However, this minimum amount is nog the ‘perfect’ award, Arcbazar also suggests an ideal award for your design competition, but you are free to choose your own. This award also should be payed up front, to make sure the designers get rewarded for their effort. One of the new things of this contest is that more than one designer will win a price. The 1st prize winner you select will get 60% of your award, the 2nd prize winner 30% and the 3rd prize winner 10% of your award money. If you feel bad for other designers which idea you also liked very much, you can give them an extra bonus. If there are no submissions at your deadline, the competition is void and you will get your money back.

Interaction between clients and designers

You can keep in contact with the designers through a wall where designers can ask you questions about your project. All questions/answers in the wall are public, so every designer gets the same amount of information. If you want to inform the designers even more during the project, you can also post any text/images on your project wall. Designers who signed-up for your project will automatically get notified.

How to select your winner?

It is hard to select a winner of your competition. Therefore Arcbazar created a public voting feature, which you can select after the deadline. Users of Arcbazar can then vote and evaluate your project designs and give you valuable feedback on your submissions.

What’s in it for the designers?

Of course the money you can win is a big motivation for designers to participate. However Arcbazar also has a point system. To motivate the designers, designers can get points when voting for other projects, signing up to a project, submitting an idea to a project and when winning prizes. To motivate them to actually submit an idea after they signed up for a project, they can also get a deduction of points when not submitting to a project they signed up for. There is a top 50 designer page on the website linking to their profiles, so the more points you get, the more exposure you get.

Designers can even earn money by using affiliate company products in their design. At the end of each year, Arcbazar will share 10% of all product sales proceeds with all designers proportionally. 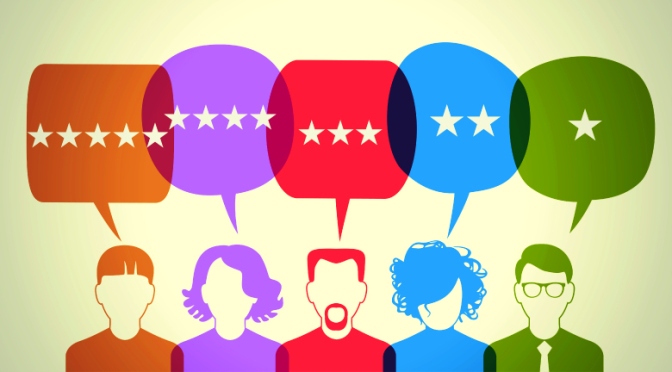 Online ratings and reviews are a growing form of interpersonal communication that is not only outside a firm’s control but also exerts a strong influence on consumers’ purchase decisions. These reviews are influenced by the consumer’s product experience, which consist of positive features, regular negative features, (possible) product failure, and product recovery.

However, are these reviews also influenced by other consumers’ online ratings?

Sridhar & Srinivasan (2012) hypothesized the moderating effects from other consumers’ online ratings on the effects of a reviewer’s positive and regular negative features of product experience product failure and product recovery to address product failure on the reviewer’s online product rating.

They used data from 7499 consumers who filled in all the personal information (e.g., age, membership duration) while reviewing. They collected their online ratings on a five-point scale and text reviews of 114 hotels in Boston and Honolulu, which were posted on a third-party travel website between 2006 and 2010.  They also collected information about the reviewed hotel’s class and amenities (e.g., business centers, swimming pools) and personal information

With a model they tested the different hypotheses which results supported the hypotheses. They found that the higher other consumers’ online ratings were:

This would imply that consumers expect more of a product if the reviews are higher. They already expected the product to work well, so if it did, this would not ‘stand out’ and would affect the reviewers online rating less. But the negative features would also affect the reviewers rating less because these negative features did not bother the previous online reviewers that much as well considering the ratings were higher. However, if the product failed, consumers would react stronger and have a stronger negative effect, resulting in a lower online product rating. This is also logically explainable, because when the reviews are very high, you would certainly not expect to have a failure in the product.

This paper documented that online product reviewers are influenced by information provided by other online product reviewers. The findings of Sridhar & Srinivasan (2012) showed that online social influence can alter the marketing phenomena. For example, the marginal impact of product failure would be expected to be negative, but together with a superior product recovery and social influence effects, this negative marginal effect may be overturned.

The main managerial implication that this paper gives are that companies are well aware of the fact that high reviews can either strengthen or weaken the effects of product failure on a reviewer’s online product rating, companies should be well aware of the double-edged effects of high online ratings of their products. If such product failure occurs, companies can proactively contact such consumers requesting direct feedback, instead of letting them post negative reviews online.

There are multiple reasons why a company should want a good logo. A good logo can make good first impressions on costumers, the moment a customer sees your logo they decide if they want to trust you or not. When a logo is good this can thus attract new customers and it can also make you stand out from the competition. To do this the logo must stand out in comparison with other companies in the same industry.

A logo is also one of the most important aspects of a company marketing wise. The logo represents the company and is seen on the company’s emails, social media platforms and marketing campaigns. The first thing a person will notice in all those things is probably the logo, because logos are a visual and those are more appealing to people than text.

It is clear that each company should want a good logo, but how to obtain one? If you hire a professional designer the cost can quickly become very high. For very small companies or startups this amount of money is not feasible. That’s why a lot of these companies go for the crowdsource option. This is the process where the work or funding is made or raised by a crowd of people and is a combination of the words crowd and outsourcing.

The idea of crowdsourcing your logo design would be to tell your requirements to a crowd of designers, tell them how much their reward is and when the design has to be finished. All of the participating designers will enter their own designed logo(s) and the company decides which logo they want to use and thus which designer gets the reward.

An online platform that provides such service at a very high speed is 48hourslogo.com. They offer the service as described above and their standard contests run a lot shorter than most other logo design websites, as suggested by the name, for only 48 hours instead of multiple weeks.

To create a project you simply login to the website, create a project with a title, some info about you business, your target audience and you choose from some standard styles a couple which you like best to give designers an indication of what your taste is like. You can also select your preferred colors and some ideas, concepts or sample logos of your own. After you filled in all of the information needed for the design. Here you have to set your contest prize, the prize the winning designer would win set as a minimum of $99, and you can select some options as a private contest or featuring you contest to make it more noticeable on the website of 48hourslogo.

After you’ve done this the option comes where you can choose how you want to start your logo design. You can choose to only pay the listing price of your contest to 48hours and postpone the contest price till you’ve actually found a well suited design or to pay the full amount in one time. This gives you the option to only lose $29, the listing fee, if there is no design among the submissions. If there are less than 10 design submissions you can even get a full refund.