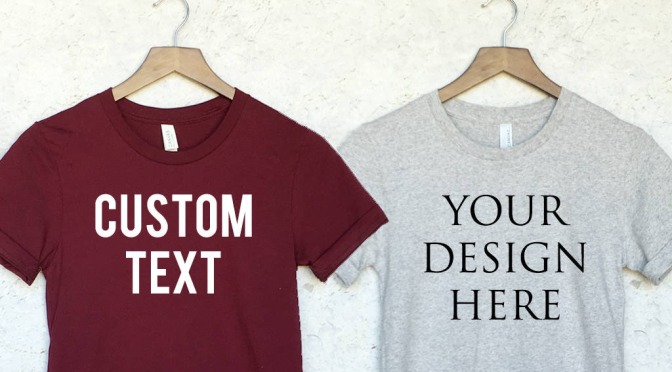 Suppose you are in desperate need of a new wardrobe, but the predetermined shops with stock shirts, pants and other offerings are too stale for you. In other words, you feel like getting creative and coming up with your own design. You might be a good designer, you might not be. It does not necessarily matter when endeavoring custom clothing websites in which you get to decide what your new clothing should look like. The reason for this is the recent invention of social customization systems, which the aforementioned article discusses in depth. Social customization systems aim to offer constructive feedback on a customer’s submitted design, providing opportunities to improve the design by suggested changes or complimenting the custom piece of clothing.

This form of value cocreation can be executed in two distinct ways, publicly or privately. In public customization systems, the feedback is displayed in an accessible environment, for example on the website of the custom clothes shop. In a private setting, however, the criticism or tips are provided in a personal setting that is not accessible to others. An example of this would be through e-mail. Social customization systems are becoming more implemented in products that are often demanded to have certain customization options. Some examples are cars, computers and clothes. This study dives deeper into differences between private and public customization systems and the response on the feedback provided.

The goal of the researchers was to find information on the hypothetical relations in social customization systems between thinking styles, public and private nature of the system, conformity to peer input, perceived closeness to input providers and the evaluation of the final product. That’s a lot of vague information to take in, so to fully understand what is meant by the mentioned variables, we’ll move on to the hypotheses.

The first hypothesis the authors address is about thinking styles, public vs private recommendations and conforming to product modifications. Thinking styles, according to researchers, can be separated by the terms holistic and analytic. Holistic thinking entails taking into account the whole of a situation when addressing a problem, whereas analytic thinking tends to split up the problem in components, analyzing them one by one. The researchers hypothesize that people with a more holistic (analytic) thinking style tend to conform to product modifications more when the recommendations are provided in a public (private) setting.

Besides this hypothesis, the authors look deeper into the evaluation of the final product as a result of perceived closeness to input providers and the extent to which the consumer has conformed to peer input. The hypothesis reads that people who conformed to suggested modifications in a greater extent, are more likely to evaluate their final product more favorably when the perceived closeness to the input provider is high. Simply put, the authors wanted to find out if you, after implementing suggested modifications, evaluate the final product configuration more positively when you feel close to the person who provided the feedback and whether you evaluate it more negatively if you feel distant to the provider.

The researchers did five different studies in order to find support for their hypotheses. While not all five studies were aimed at both hypotheses individually, they did in most cases contribute towards support. Consequentially, the authors managed to find significant support for both hypotheses, which means that holistic thinking people are more likely to conform to public recommendations, whereas analytic people prefer private communication. Secondly, they found that closeness to the input provider does implicate that you are more likely to evaluate the final product favorably.

The findings of this study offer three new insights in existing literature with regards to social customization systems and consumers’ final product configurations. Firstly, it is now empirically supported that when a consumer receives public input on a design or setup, this person is more likely to conform to this input when the thinking style is holistic, while the opposite goes for private input and analytical thinking styles. Secondly, the finding that perceived closeness to the input provider matters when evaluating the final product modifications contributes to literature. Lastly, this research shows that the main predictions of social impact theory  are relevant across systems in passive systems rather than systems in which active participation and contribution is the standard (Latané, 1981).

In short, this study enhances insights on two important moderators (closeness to input providers and thinking style) as well as expanding the understanding of the social influence in social customization systems.

Practically speaking, these results are highly relevant in managerial decisions. Given the findings with respect to thinking styles and conforming to customization, decision-makers should take into account what the more prominently present thinking style is in a certain market or country when deciding on the nature of recommendations. For example, it was mentioned in the study that German people, on average, are more analytic thinking people while Japanese people tend to be of a more holistic thinking nature (Monga and Roedder John, 2007; de Bellis et al., 2015).

Besides that, the conclusion that feeling close to a person when taking into consideration their suggested modifications, allows for managers to think about how they wish to design their social recommendation system. Given that it is difficult to determine the personality of a person just through their browsing behavior on the website, it could possibly be a wise move to further implement abilities to share your customized product with friends, whom you are often times feeling close to.

One of the most solid decisions made by the authors of the research was the opting for five different studies to find proof for their hypotheses. While a single study often times suffices in providing support for a hypothesis, the authors decided that, in order to eliminate most doubt or ambiguities in the research, five individual studies would improve the reliability of the research. This has definitely helped the credibility of the paper.

Another strong aspect of the study was that researches 2, 3 and 4 were all conducted in a natural environment rather than a fabricated one. The participants of those studies were asked to browse a website in which custom men’s dress shirts could be designed on an actual online social customization system. By providing the natural element to the studies, the chances of generalizability of the research increase.

While the findings of the study are highly relevant and some good overall decisions were made in the design of the study, some weaknesses are present as well. Particularly the decision to attribute a whole country to a particular thinking style is considered to be a non-desirable move. The first of the five studies that were performed in this research categorized Japanese people in general as holistic thinking people while German people were all attributed with the analytic thinking style. You might have tested this for yourself and are likely to have found conflicting results. This means that the generalizability of the study is at stake. This is not the only weakness found that impacts the generalizability. Other than the thinking styles being attributed with entire countries, the studies were often times focused almost solely on male or female participants rather than having a gender neutral product with an even distribution of gender. This makes it difficult to conclude whether the results hold across genders.

Monga, A. B. and Roedder John, D. (2007) ‘Cultural Differences in Brand Extension Evaluation: The Influence of Analytic versus Holistic Thinking’, Journal of Consumer Research. doi: 10.1086/510227.