Most of us can no longer imagine world without social media, but this has brought a number of new responsibilities for companies, for example: webcare. But what is it webcare actually? And what is the best way to use webcare? Let’s find out!

Due to the emergence of social media, more and more platforms have been created where people can share their thoughts and opinions: they can share information and experiences but can provide feedback as well. In this way, social media empowers consumers to influence other consumers’ purchase decisions. One of the ways consumers interaction happens via social media is through brand-generated platforms or consumer-generated platforms. The first is created by the company itself (e.g., brand’s official Facebook page) and the second is created by members of the general public (e.g., Volkswagen car owners club) and includes any form of online content created and consumed by users (Kim and Johnson, 2016). Those interactive Internet platforms have resulted in a loss of control for companies, since consumers are more empowered to voice their ideas and reach a large audience. Hence, this is where webcare becomes important: “the act of engaging in online interactions with (complaining) consumers by actively searching the web to address consumer feedback”.

What is webcare?
To simplify, webcare is the act of responding to questions, feedback and complaints on social media. On the before mentioned platforms everyone can post whatever they want, which can be fun (“Thanks for the PERFECT service!”), but challenging as well (“Already the 10th time my order goes wrong @$^(#@&*@!”). These interactions are commonly referred to as consumer engagement: “consumers non-transactional interactions with a brand or with other consumers in a brand context”. This engagement can be active, when consumers contribute to or create brand-related content, or passive, when brand-related is merely consumed, where active engagement strongly influences the attitudes of those who observe the created content. Besides some downsides, these platforms provide benefits for a company as well. Because, they have enabled them to engage their consumers more, and even better: they have the power to convert these consumers into fans and therefore to passionate and loyal customers.

How to use webcare?
Schamari and Schafers (2015) investigated how brands can use webcare on consumer-generated platforms to increase positive consumer engagement and have come to a number of conclusions. For the study, 188 participants were exposed to an online message in which a consumer expressed his or her satisfaction with a car brand. Half of the people observed a webcare respons from the car brand in which the writer was thanked for the compliment. The other half of the people did not see a webcare reaction. These messages were either shown on a platform managed by the car brand itself (a branded Facebook page) or on a platform managed by consumers themselves (a consumer forum).

The results show an increase in engagement intention when organizations respond to online compliments. People are more willing to share positive information, make recommendations or participate in online conversations when they read a ‘thank you’ message as response to a positive WOM message. These results are particularly visible when the message is shown on a consumer platform. This is explained by the so-called surprise effect. Consumers do not expect to receive a response to a platform that has been set up for and by consumers. So on, the surprise is greater when a brand thanks them kindly for the online compliment. The surprise effect was not present on the platform of the brand itself, because it is more obvious to get a response on a compliment on branded channels. Furthermore, the design of webcare is important, especially humanization. Particularly, personal webcare is more effective than impersonal webcare in driving consumer engagement intentions, which is explained by consumers’ perception of a brand’s conversational communication style. An example of a company (Transavia) that uses all these elements on a consumer-generated platform can be seen below. 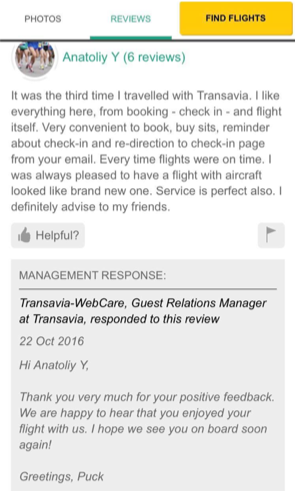 One of the strengths of this research is that the authors focused on the effectiveness of webcare as response to positive consumer engagement, which has not been given much attention in the literature. Furthermore, the practical contribution of this research could be valuable for companies, because they could make use of the results to increase positive customer engagement. They could do this by responding to compliments on consumer-generated platforms in a personal way. To make the message as personal as possible, using someone’s real name instead of the brand name is a great start, but it could be valuable to look at the content of the responded message as well, which is not included in this research. Thus, it is clear that responding to positive messages is important, but further research should look at the added value of content in personalized messages and the effect on customer engagement as well.