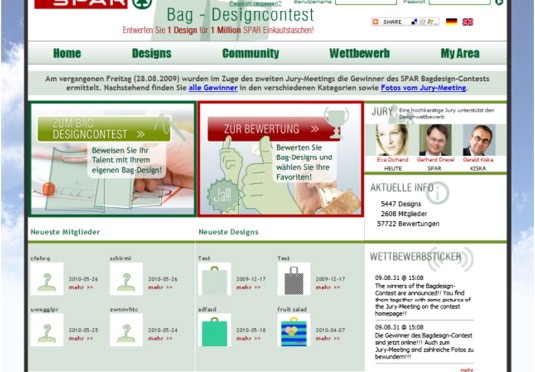 Nowadays, companies are really engaged with consumers as they participate in a company’s development process. Active contribution leads to ideas, solutions and positive word-of-mouth(WOM). Collaborative innovation creates a sense of community among the participants. However, it may not always live up to the expectations of its members or is seen as a success. So, are there only positive sides of co-creation? The goal of this paper was to explore triggers for positive and negative reactions from engagement in online innovation communities (Gebauer et al., 2013).

How did they study it?

The ‘SPAR Bag Design Contest’, a design contest for shopping bags of a retail chain in Austria, served as research field.

The qualitative study analyzed the comments that users posted to see if there was more a positive or a negative discussion. The findings showed mainly a negative discussion about the outcome of the contest, resulting in negative WOM, open criticism of the contest and the brand SPAR, complaints and initiatives to start a protest. The members found that the jury did not focus on the design itself but on the word play of a design. Confronted with the unexpected hostility, SPAR decided to back down from the winning design and print the design that was voted by the community. The dissatisfaction of the outcome was due to lack of transparency, honesty, fairness of the contest, causing initially enthused and highly involved community members to start trouble.

Study 1 showed that both positive and negative reactions of members can result from satisfaction/dissatisfaction with their experience and the outcome of design contest, when observing only the comments of the platform. Study 2 quantitatively tests how co-creation experience, perceived fairness, satisfaction, and sense of community influence member reactions as WOM and willingness to pay(WTP) by conducting a survey. The findings indicated that participants who do not like the winning design may still talk positively about SPAR, the imitating company, if the decision process is seen as fair. Nevertheless, they will not buy a design that they do not like, no matter how fair the process is. Further, only those participants who had an enjoyable co-creation experience which also contributed to a distinct sense of community show a higher WTP for the winning designs.

The paper checked for robustness of the results of the qualitative study by conducting a qualitative study. The found triggers showed that fairness in an online innovation contest is important and requires future research as this paper was the first to address the fairness in online contests. Lastly, the paper provided several solutions to deal with online conflicts. The study took place in Austria, but the SPAR chain is international active, it would be an improvement to expand the design contest in other countries to increase external validity. As the generalizability of the results might not apply in other countries where there are cultural differences, e.g. in Asian countries as they avoid confrontation and conflict (Brett et al., 2013).

Interesting, what are the practical implications?

Companies now know that co-creation project carry the risk of conflict. However, members react positively if they experience fair treatment. Companies need to ensure a fair structured process by explicitly stating the rules of the contest and outcome. To create a joyful co-creation experience do companies need to take control of negative discussion by engaging in an open dialog, for example by appointing a community manager to directly clear misunderstandings. The label design contest for Pril (a dishwashing detergent), led to contestants engaging in negative WOM and started to protest against the contest (Breihut, 2011), but the company did not prepare actions. Moreover, the community is asked for contribution which means neglecting their feedback when taking decisions will lead to dissatisfaction. Kraft Foods, for example, experienced serious opposition from its customers when choosing a new name with a contest for its popular spread Vegemite, an Australian salty paste (Vasek, 2009). The engaged participants were not satisfied with the jury’s decision of selected winners as outcome of the co-creation project. Thus, companies need to create a fair online contest, which will then lead to a positive co-creation experience and participants contributing to positive WOM and WTP.