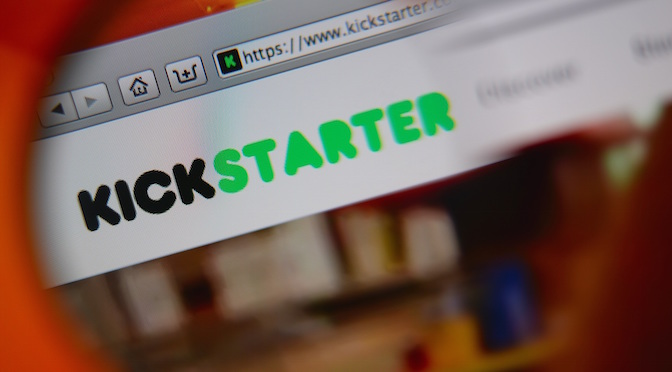 When deciding to fund a project on a crowd-funding platform, does it matter to you how close it is to its target? This is what researchers Kuppuswamy and Bayus (2017) investigated in their study “Does my contribution to your crowdfunding project matter?”. Prior scholarly work in this field has focused mostly on the significance of early contributions, and their ability to signal quality and lessen project uncertainty (Colombo et al., 2015). They found that people financially support projects when they believe their contribution will have an impact. Using a panel-data approach, the study examined 10,000 randomly-selected funded and unfunded Kickstarter projects (posted between 2012-2014), with the following variables.

The results reveal the following phenomena, forming the basis of the proposed “impact theory”: 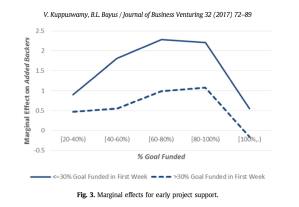 The figures illustrate U-shaped patterns for funding contributions over time. From a customer-centric perspective, backers are thus motivated by the target goal of the project and its proximity. For both pro-social reasons and the opportunity to receive the promised rewards, backers want the project to succeed (Gerber & Hui, 2013).

The paper offers new insights into crowd-funding behaviours by empirically studying its dynamics over time. For example, the ‘impact theory’ can explain the “Kickstarter effect”, which is the observation that more than 90% of projects that achieve at least 30% of their goal will eventually reach their target. People want to make an impactful contribution, which means that projects that are near – but not past – their target are most likely to receive support. Other crowd-funding phenomena, such as herding, cannot account for this by themselves. A weakness of the study is that the outcome measure is only focused on whether or not a contribution was made. To determine whether people voluntarily contribute more when they believe it will make an impact, a future research direction would be to measure contribution amounts.

The study highlights several practical implications for entrepreneurs. Setting the appropriate goal has a high impact on potential funding. A too-high goal makes it challenging to get close enough to the target for the goal gradient effect to arise. However, a too-low goal may prematurely halt contributions, because support declines after the target is reached. Furthermore, communicating the target goal and the goal process in the form of updates/reminders can increase contributions, as this also triggers the goal gradient effect.