Have you ever wondered why on crowdfunding platforms some great projects do not receive funding while bad projects do? Crowdfunding success depends on several factors, and this academic analysis will serve as an explanation.

According to Parker (2014), crowdfunding platforms allow the public to make small investments into entrepreneurial ventures. The very nature of crowdfunding insinuates that there are elements of consumer value co-creation incorporated into every aspect of the business model. Crowdfunding platforms are merely an intermediary for people to provide funding to businesses who in return create value for the investors and public. This particular study was unique as it focused on signals of project quality and how they can cause information cascades to form. The study shows that due to information asymmetry between informed and uninformed investors and information cascades, it is not always the best projects that receive funding. An information cascade occurs when a person observes the actions of others, and despite their own private information, engages in the same behaviour (Eftekhar, Ganjali & Koudas, 2013). This is especially true in crowdfunding, as suggested by Parker (2014), irrational herding occurs because people tend to fund the projects that already have the most funding. This creates an interesting paradigm and can end up having positive or negative outcomes, depending on the number of good projects and informed investors that are present in a pool. 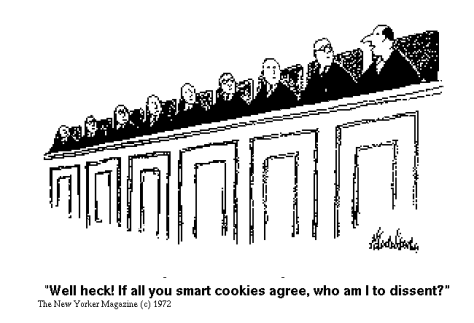 In a random order investors were asked to commit one dollar to one project of their choosing. Investors make a return if they commit to a good project and it reaches the funding threshold, but receive back their contribution if their project does not move forward. There are people present who know which projects are good, but are unable to signal to other investors directly which ones they are.

The model and simulation were created on the premise that logically, there are more uninformed than informed investors, and the uninformed tend to follow the few investors who predominantly back good projects (Parker, 2014). However, it was found that sometimes there are not enough informed investors to back projects. Without sufficient backing needed for the uninformed investors to create the information cascade, the projects will not get funded. It was also interestingly noted in the study that certain projects have higher funding thresholds than others and for that reason more of certain types of projects end up receiving funding. For example, 60% of arts projects reach the funding threshold compared to only 29% technology projects because arts projects are simply less expensive.

The study found that having more good projects in the pool was not necessarily associated with higher funding of good projects, and similarly it was found that having a higher number of informed investors does lead to better projects being funded. This is due to the crowding out effect whereby when too many good projects available, resources get spread too thinly and few projects receive funding (Burtch, Ghose & Wattal, 2013). It was also because uninformed investors are the most active promoters of information cascades, and without them the functionality of the crowdfunding platform decreases.

Overall, the most interesting aspect and practical application of this study is that it proves how equity crowdfunding platforms could have diminishing returns on efforts to improve the quality of projects and investors (Parker, 2014). For future research in this area it would be beneficial to determine the optimal balance between bad and good projects in order to get as many good projects funded as possible.

Burtch, G., Ghose, A., & Wattal, S. (2013). An Empirical Examination of the Antecedents and Consequences of Contribution Patterns in Crowd-Funded Markets. Information Systems Research, 24, 499-519.