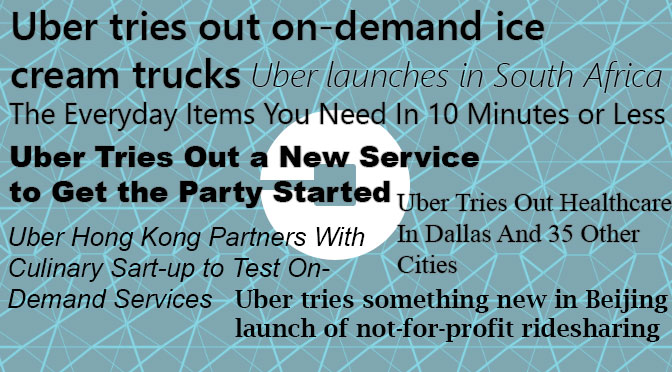 In the past few years, Uber has tried out a variety of new services, ranging from on-demand picnics and ice cream trucks to healthcare. The result is “a reputation for testing the market with little things to whet the appetite to then do something big” (Biggs, 2014). For decades, Ansoff’s (1957) framework has been used to map such growth opportunities, but applying this framework to businesses with a multi-sided platform is difficult. In this blog post, I therefore propose a revised version of this framework, called: Growth strategies for two-sided businesses, and provide further explanation by showing how it can be used to map Uber’s growth opportunities.

In 1957, Ansoff published his well-known framework ‘Strategies for diversification’, often used to map possible growth strategies. In the framework, existing and new markets are combined with existing and new products. This results in four quadrants, representing four categories of growth opportunities: market penetration, product development, market development, and diversification. Typically, market penetration opportunities are considered to be the least risky growth strategy, while diversification is seen as a very risky endeavor (Ansoff, 1957).

Numerous businesses using multi-sided platforms have emerged and disrupted many industries in the past decade. Examples include AirBnB, Facebook and Uber. Just like each one of these successful companies in the sharing economy, Uber’s key asset is its platform and user base. On this platform, instant matchmaking takes place when a user at one side of the platform (the passengers) requests a service from one of the providers at the other side (the drivers).

It is important for every company with multi-sided platforms to keep innovating, in order to avoid its user base from being swallowed by a related platform (Eisenmann, Parker & Van Alstyne, 2006). When attempting to map growth opportunities for such multi-sided businesses in Ansoff’s matrix, a problem emerges: these businesses have not one, but two or more markets that can be existing or new. AirBnB has hosts and guests, Uber has drivers and passenger, while Facebook has social users, advertisers and app developers. Ansoff’s (1957) original framework does not allow for differentiation between these market sides.

Towards a 21st century revision of Ansoff’s (1957) framework

In this blog post, I would therefore like to propose a revision of Ansoff’s framework: growth strategies for two-sided businesses. This framework consists of three dimensions. The first dimension is existing vs new users; does the growth opportunity address the original user segment or will it attract new ones? The second dimension is existing vs new providers; does the opportunity comprise a service provided by existing or new providers? The third dimension is value proposition; does the opportunity comprise an existing value proposition or a new one? The first and second dimensions are mapped in the 2×2 matrix, whereas the third one can differ within in each one of the quadrants.

In order to further explain the framework, I will elaborate by using growth opportunities for Uber.

The first quadrant is existing providers vs existing users. Through price promotions and app improvements, Uber could increase its market penetration with its existing product.

The third quadrant is new providers vs existing users. The launch of UberX, in which anyone with a decent car can be the service provider, in areas where UberTaxi, where traditional taxi drivers provide the service, already exists can be considered an example of an existing value proposition that is being provided by new providers to existing users (Anthony, 2014).

The last quadrant, new providers vs new users, provides a lot of growth opportunities. For instance, Uber’s launch of existing services in new geographical area, such as South Africa (Sanchez, 2015). Or the hypothetical launch of an on-demand helicopter service, something which is already done by other companies (Feinberg, 2015), could be a growth opportunity of a new value proposition provided by new providers, to new user segments. Another example is UberIceCream, available in several cities, where ice truck owners become the providers of a new value proposition to potentially new users (McGlaun, 2012).

Fig 4. Overview of Uber growth opportunities discussed in this post