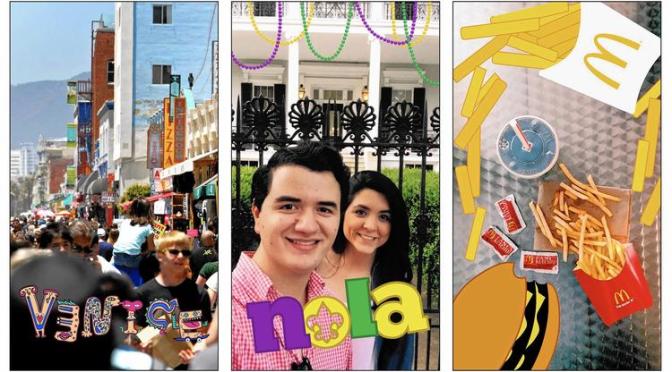 With certainty I can say that at least 99% of you are familiar with the app SnapChat, which allows you to capture your barefaced party selfies and videos and send them to your beloved friends without regretting it the day after. Since its inception in September 2011, the popularity of the app has been growing at rapid pace and this has resulted in a 100 million daily active user base worldwide. So far so good, all credits to the development team, right? However, as a similar story to most platforms, SnapChat did not even have a thought-through strategy on how to obtain revenues from their fast-growing user base (Morrison, 2015). Yet, quite recently, this has changed…

Start of the monetization

Since the acquisition of facial recognition start-up Looksery, back in September 2015, SnapChat is able to provide its users with ‘sponsored lenses’. These enable users to send animated selfie pictures or videos by making use of a special filter, the so called ‘lenses’ (Constine, 2016). According to SnapChat, sponsored lenses allow users ‘to express themselves and connect with a brand in a really creative and dynamic way’. By that, they encourage their user base to spread advertisements across family and friends, who in turn will perceive these advertisements as fun instead of intrusive. This opens up doors to a new way of marketing, in which consumers play a key role in joyfully distributing advertisements.

Lately, the Gatorade sponsored lens for the Super Bowl final had over more than 100 million views on SnapChat. This proves the huge potential the platform has for advertisers. Depending on the day and time, SnapChat can charge companies such as Gatorade up to $750.000 for this advertisement service (Flynn, 2016).

‘The sponsored lenses feature opens up doors to new ways of marketing, in which consumers play a key role’

Serena Williams, no. 1 ranked in women’s singles tennis, making use of the Gatorade Super Bowl lens

In line with the sponsored lenses, SnapChat announced a new feature a couple of days ago. From now on, not only large brands, but also users and smaller companies are allowed to create their own location exclusive filters, at a starting price of just $5. Prices depend on the time (an hour up to thirty days) and the size of the geographical space the filter is supposed to cover. Users are expected to create these for their own weddings, parties and other events, while smaller companies can use the platform for advertising purposes without being forced to allocate a fortune to marketing expenditures (Dave, 2016).

By watching this video, you can get a feeling of how it works:

By creating and customizing their own designs, SnapChat users are considered to be actively involved in the process of co-creation (Saarijärvi et al., 2013). Furthermore, it’s interesting to identify the reasons behind the user’s willingness to create and design own filters on SnapChat. Out of the four benefits, I believe the users benefits are mainly in terms of social needs and fun (Tsekouras, 2016). The average SnapChat user, with an age between 14 and 25, loves to be seen and to show off in front of friends, and besides, they derive pleasure and satisfaction from creating their own designs.

Unfortunately, right now the on-demand geofilters are only available in the United States, the UK and Canada. Nevertheless, Snapchat disclosed that they will roll out this feature to other locations in the near future. Hopefully the Netherlands will be one of those locations. Taking into account the fact that I can’t be considered as a real creative mastermind, I would love to assist by bringing it up here: who is willing to release his or her inner designer in order to create the very first geofilter for the RSM?

Dave, P. (2016) ‘Snapchat allowing geofilters for any party, event or company for as little as $5’ URL: http://phys.org/news/2016-02-snapchat-geofilters-party-event-company.html