Do you feel unique? Well you certainly are, but your photos on Instagram sure aren’t. At least, according to a study conducted by Zheng and Wei (2013). These authors examined the way content is generated on social networking sites in relation with the social ties a user has. This research is of interest because the appeal of a social network site is highly dependent on the content generated by its users. With the increasing number of competing social media, it becomes more important to offer differentiating content. However, according to the authors of this paper, the content generated by a user is often similar to the content generated by his or her social ties, especially around the time of formation of this social tie. 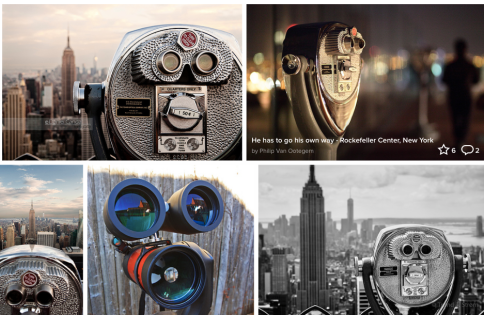 The theory behind this research is that forming social ties is correlated with homophily and contagion. Homophily refers to the tendency of people to relate to each other. This feeling of relating can be caused by shared intrinsic characteristics, a shared opportunity or affinity. For instance, it is more likely that two persons will create a social tie, because they both have the same interest or are located near each other. After a social tie has been created, the individuals often become more alike to each other. This process is referred to as contagion.

Yet according to the uniqueness theory (Snyder and Fromlin, 1980), we all have a strong desire to be unique individuals. Being too similar to others will induce negative emotions. Therefore it would be expected that we all generate distinct content in an attempt to differentiate from others.

Zheng and Wei (2013) based their research on a sub network from photo-sharing community Flickr over a timespan of 41 days. The data was gathered by taking one user and its social connections as the sample group. Every new social contact connected to this network group within these 41 days was subsequently added to the sample group. At the end of these 41 days, the sample consisted of 116,237 dyad pairs and 434,102 photos with 351,985 unique tags. The authors also examined whether the social tie was one-way or two-way as well as the popularity of the users based on the number of favourites their photos receive. Similarity of the photos is measured by the amounts of shared tags assigned to the photos.

The results of this study indicate that similarity of the photos is largest around the time the social ties are created. After the social ties have been created, the similarity of the photos uploaded by the pair of dyads decreased when they both have same popularity levels. However, then there is a high discrepancy in popularity between the two connected individuals, then the similarity of photos uploaded by the dyad remains. As such, the popularity level of the individual acts as a moderating variable.

While the research was based on a sample from Flickr, the results can be generalized to other photo-sharing communities such as Instagram, but also to Youtube and Twitter. However, the study is highly limited by the fact that the measure of similarity of photos is based on tags, which is a textual characteristic. The study, which is based on photos, does not take visual characteristics into account at all.