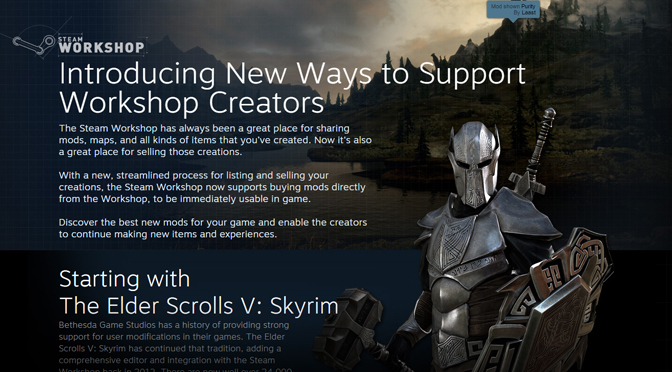 Valve Corporation, the company that touts itself to be “boss-free since 1996” when it was founded may have just found its boss. After an announcement to allow creators of user generated content for the game Skyrim to charge for content on their Steam platform, they were met with great backlash from the community on the platform. A petition on Change.org gathered 133,000 signatures in a week and according to CEO Gabe Newell the mods have generated only ten thousand dollars in revenue compared to the million and more it costs for them to address the negative feedback. Users, both players and creators, had their concerns about the dynamics of such a model, leading to removing the feature from Skyrim, refunding purchases, and reconsideration of the whole concept on Valve’s part.

Creative gamers have for long formed a subgroup of “modders”, players and/or developers who design modifications or “mods” to existing games ranging from visual design elements to totally changing the nature of the gameplay. Steam has helped to bring their designs accessible to users on the platform in their Steam Workshop and wanted to extend this relationship to where both could profit.

To roll out the feature they partnered with Bethesda, the company behind the Elder Scrolls series of games and the latest release Skyrim. Skyrim mods placed in the Steam Workshop, could now be available either for free as it has been before, for a price or sold with a pay what you want model. The economics of the model for the parties involved is described by Bethesda to follow industry standards. Valve receives 30% much like iTunes and Google Play Store would. The rest Bethesda split by looking at the earnings of both developers in-house and the external creators. They settled for a 25% cut for the creator and 45% to Bethesda. After all they provide the original game and most of the tools used to create the modifications for the game they argued.

Both Valve’s and Bethesda’s intention according to their statements was to increase the quality of the mods released. If looked at from the perspective of the marketing value system used in the article by Carson et al. the change to a paid model was successful in adapting to a new judiciary environment and political elements involved. The intellectual property rights of derivative content needed to be thought through in a process that took Valve three years.

The social norms involved with purchasing products, compared to using content someone has created for free are quite different. Paying for a product comes with the expectation that it is supported and works according to the description. Valve and Bethesda expected the content to become better as the creators would work to this arrangement. Modders and players disagreed and pointed to many of the institutional arrangements that would not support this. Bad product would be brought to the market as there is a financial incentive rather than an incentive to provide a positive contribution to the community. If anyone could push content to the market, it would be hard to determine the quality of the products within the 24 hour return period Steam allows. Mods can also be downloaded from a multitude of websites, so there is potential for someone to download a mod and sell it as their own on the platform.

Looking at the remediable efficiency criteria, the modders did not find the joint profit allocation of the new model to be fair based on their effort and time utilized. The interdependence of many mods could lead to great user dissatisfaction, although pushing the new model forward to users efficiently. Players would be required to purchase mods that the mod they intended to download for free for was based on.

The backlash did not only bring about negative comments, but potential arrangements Valve could implement to ensure only good quality user generated content is sold. Many favoured a tiered rating and review system to be implemented, so that only modders whose content has been downloaded often and reviewed positively could sell their mods.

The institutional arrangements Valve attempted to implement were not detailed enough to cover for situations the users had thought of. Now that they have a dump truck of emails to go through, hopefully in that pile they will find the right mix of arrangements to cover the concerns of the community.