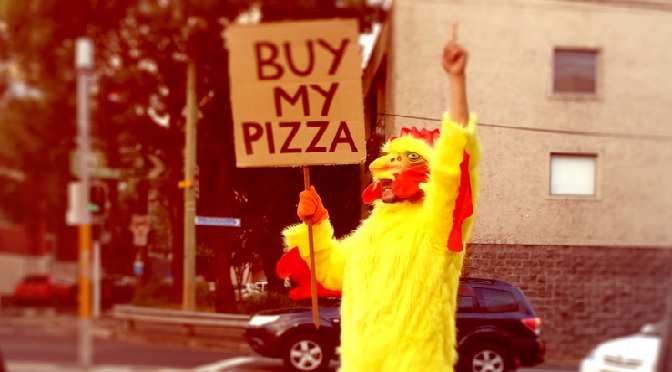 User-generated products nowadays full fill the needs of consumers all over the world. Nowadays, companies involve people more and more in the idea generation of products.  Most companies see many benefits of the wisdom of the crowd and try to use the creative ideas of people by rewarding them with money.

Pizza Mogul allows anyone in Australia to create their own pizza with Pizza Chef. When you’re done creating your pizza and making a name for your pizza, you have to log onto Facebook so you can share the pizza you’ve created. With this concept, Domino’s Pizza also create awareness on social media in order for the user to complete the process. After the whole process is done, the pizza will be listed on the Domino’s menu in minutes.

However, it doesn’t end here! Users are able to earn money with their created pizzas. You can earn between 25c and $4.25 per pizza. In addition, you can also donate a percentage to charity. The leaderboards show top earning Moguls (users), Top Earning Pizzas, and the biggest givers to charity. Leaderboard create competition and a fun factor among the Moguls. Besides money, people can earn rewards in form of badges and bonuses.

You might think creating pizzas isn’t profitable, but Pizza Mogul proves you wrong when showing you the leaderboards. #Pizza_master already earned $33,540 selling 19393 pizzas on Pizza Mogul, where the number two and three respectively earned $27,385 and $12,332. People like buying pizzas made by users rather than the company itself.

In return, Domino’s can use the pizza names without giving any royalty for it. However, they give you a royalty when selling your pizza.

So with the trend of companies trying to involve customers in the creation of products, companies should get more and more innovative when “luring” customers to their brand. As mentioned above, users can earn a fair amount of money when creating a product they like, and also like others to enjoy the product they make. Do you think that companies would need to attract users on other ways than the way domino’s does right now?