When browsing the internet you normally encounter dozens of news items, blogs and other content. It is no exception that a catchy title usually makes you decide to click through and see what’s out there. And of course when the item ‘Android takes a piss on Apple on Google Maps. Seriously’ popped up on my Facebook news feed I decided to take a look at it.

If you would have searched on Google Maps on the 24th of April for certain coordinates just south of Rawalpindi, Pakistan, a giant Android could be seen urinating on the Apple logo. First thought was that it was an Android developer fuelling the old rivalry again, although later Google released that it was user-created content which was slipped through the approval filter. Because of this item I decided to dig into Google Map Maker, the tool that allows you to edit Maps, which was unknown to me since I had read the blog.

The official goal of Google Map Maker is to share information about places in user’s neighbourhood, like companies or university campuses. Places which are inaccessible with Google street view cars can thereby be edited by Map Maker users. It is actually even more elaborate, because users are also able to add roads, railways or other places and add new languages. Once an edit is sent to Google, it can be reviewed by other users by giving a thumb up or thumb down. This score is considered by the Google algorithm to accept or reject the edit. As we can see with this case users can, with enough peer user support, fool the algorithm.

If we look into the business model of Map Maker more closely we can link it to the first phase of consumer co-creation, namely recommend and develop products. Instead of only browsing through Google Maps to find by Google pre-defined places users can now develop new elements and recommend them to each other. The wisdom of the crowd is the most prominent reason for delegating (crowdsourcing) products. Best known comparable platform that uses this is Wikipedia. At Wikipedia every edit is implemented immediately and can be removed by higher ranked users if they incorrect, offensive or silly. 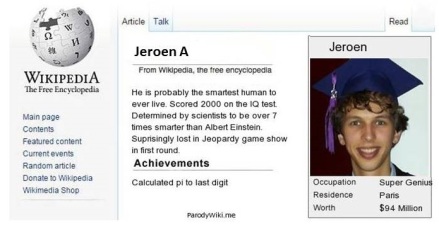 During our course we learend that controlling quality of submissions can be done by having specific terms and conditions, clear guidelines peer evaluation of content and punishment or public shaming (Tsekouras, 2015). However, the first thing that teenagers do when joining Wikipedia is to make a page about themselves or another try to edit a celebrity’s page. We now have seen that this can also be the case with Google Maps. Google claims that ‘the vast majority of users who edit Maps provide great contributions’, however internet users show that a manipulation is easy to make. What do you think of user generated content on the internet? Should it be better monitored or are we allowed to have a joke every once in a while?