Imagine you are an entrepreneur and you want to raise money in order to set up a project or small business by means of crowdfunding: the practice of raising small amounts of money – funding – from a large number of people – the crowd – to finance a project, which happens most commonly via the internet (Schwienbacher & Larralde, 2010). There are many different forms of crowdfunding, and it is a maze for you to choose the right structure and funding focus. How to make the right decision of the path you are going to follow that is suitable for your business? Paul Belleflamme, Thomas Lambert, and Armin Schwienbacher (2014), have written an article that gives a valuable advice in making those kind of decisions, whereby they compare two types of crowdfunding.

Adding to this main implication, when  exercising a pre-ordering structure, the amount to optimally implement price discrimination between first stage and second stage supporters, may be constrained by the amount of funding that the entrepreneur needs to raise in order to cover the fixed costs. When this amount surpasses a threshold, the profitability of the project is reduced. For higher funding goals, equity crowdfunding becomes more meaningful for entrepreneurs when community/social benefits are associated with financing the project, since larger amounts of individuals will support the project, whereas the fraction of profits the entrepreneur needs to give up remains equal.

To apply those findings on real-world examples, I would like to highlight two cases.

Yoni – Last week I interviewed the founders of Yoni, a start-up company that produces organic cotton tampons and pads. The founders raised their starting capital on oneplanetcrowd.com under a pre-ordering structure. By means of perks, crowd funders could pre-0rder products for a premium price and in addition to the product itself they received a special thank-message or a t-shirt. Currently, the products are available for a lower price. Here, we see the typical path of first having initial, first stage supporters (the crowd funders) and later in the process second stage supporters (regular customers). When I asked about their choice for this pre-ordering structure, they said that this was the quickest and most convenient way to start producing their products, which is an operating decision. Besides that, their products are able to reach a large base of customers, which is in accordance with the article. 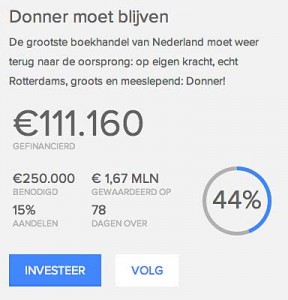 Considering those cases and the article, I think that both firms made the correct decision in tapping the right audience. Going back to the article, Belleflame et al (2014) address that when the project is driven by financing decisions, entrepreneurs should choose a profit-sharing approach, whereas when the project is driven by operating decisions, the entrepreneurs should choose for a pre-ordering approach. Reassuring this, both cases have chosen to the right structure, as it both led to success.