According to Randall et al (2005) moving the specification decisions of a product from producer to user can be a valuable decision considering that the user is the agent in the value chain with the most knowledge about user preferences.

In the case of Philip’s HUE, this was certainly situation. The HUE lighting system uses LED bulbs – with a twist! Opposed to being controlled by a switch, the Hue bulbs are controlled with your smartphone using an IOS app. The light lets you switch between a wide spectrum of colours and brightness settings, allowing you to customize the lighting in your home around mood or setting (Forbes, 2013). The “how many years does it take to change a lightbulb” is an amusing creative video that will allow you to get a feel for the product.

When the product was launched late in 2012, HUE had an enthusiastic group of users and hardware/software developers seeking to deliver extending compatible apps and integration with other products. Thus, Philips answered to this by formally launching HUE LED Lamp APIs and a software development kit. This opened the playing field for third party developers to create new, exciting applications using light (Philips 2013).

This was no mistake considering that the HUE community created rich functionality for an enhanced customer experience (Philips 2013). A cool example is that external developers have created apps that integrate Hue with music. Hue Disco controls HUE lamps dynamically based on the music beat picked up by the microphone in the smartphone (Ledsmagazine, 2013). Another example is a scheduling application that can integrate with a phone’s calendaring application.

The developers can use the new tools to more easily develop apps and this is still happening today. For example, manufactures currently working on universal TV remote controls are considering adding HUE support (LedsMagazine, 2013). Other devices such as thermostats might integrate HUE as well. (LedsMagayine, 2013)

According to Kevin Toms, Developer Advocate of Hue’s software developers’ platform, the response from the HUE community has been incredibly positive (Philips, 2013). Philips thus aims to continue redefining the possibilities of light by enabling developers to create apps that customers want and need.

How did Philips leverage developer communities for innovation?

Results: Generating Innovation and PR that translates into sales! 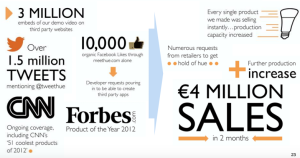