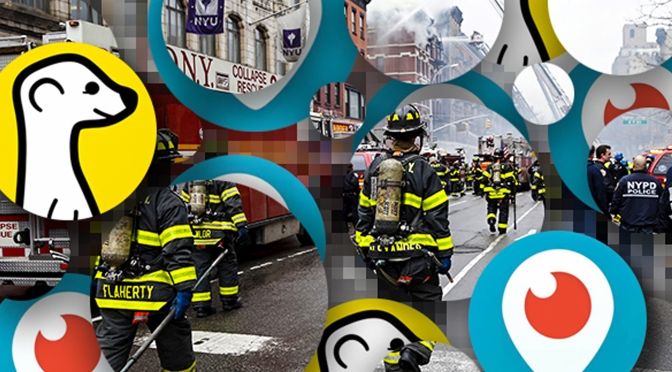 Meerkat is a promising application: the start-up got over 4.2 million dollar in funding and has over 120,000 users already.[2] Furthermore, after the successful introduction of Meerkat, Twitter launched its own streaming application called Periscope. Both Meerkat and Periscope allow Twitter users to broadcast anything they like. I’m conviced that these streaming apps will shake up the news industry.

Already, news organisations started experimenting with both Meerkat and Periscope. The Economist correspondent Henry Curr answered questions send in via Twitter, using a Meerkat stream. According to the Economist, ‘Meerkatting’ is perceived more informal and a great way to engage with their Twitter audience.[3]

Already, consumers are adding value to the news industry by sharing information about any kind of occurrences on social media (both text and pictures). This is already being used by journalists to pick-up the latest news flashes: 45% of all journalists put out 60%-100% of all they publish as soon as possible – without checking facts – and correct later if possible. Just 20% of the journalists always check the facts before publishing.[4] Via the streaming apps, consumers can start adding value to the news industry by sharing directly what they see: it’s an additional point of view next to traditional news organisations and, moreover, viewers can interact with the broadcasters. Concluding, you and me can help sharing news quicker and more reliable.

So from now on, news organisation are becoming of less importance in providing news to societies? No, that’s a misunderstanding. Meerkat and Periscope were widely used after an explosion in York City. Some were stating that these broadcasts were introducing a new era of journalism, while others were less convinced by the usage of the streaming apps. Jacob Brogan, Future Tense research associate, stated that “People weren’t getting information from either that they couldn’t have found more easily and more clearly on Twitter” because “it was too far from the scene to reveal more than the fact that the fire was still burning”.[5] I do not think that Brogan isn’t right there, but the ‘Meerkatters’ aren’t replacing journalists. While news organisations will remain the most reliable source for news, ‘Meerkatters’ can show news from a different angle and, moreover, followers can interact with the Meerkatters.

You and me are not going to take over news organisations – we shouldn’t even want to do that – but we are going to add value to the news industry!