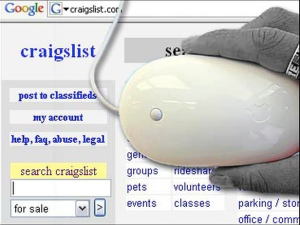 Craigslist is an internet-based platform where people can sell their personal stuff. Not only that, but you can also share news, post a photo of your lost pet, look for a partner/a house/a job, find a ride to somewhere, advertise the service you offer or advertise that you need one, participate on a discussion board and much more. If you go to the Craigslist website, you will see that it keep things very simple. There are no ads on the website. It earns revenue by charging for job classifies in some cities. Craigslist encourages that users deal locally to prevent scams and frauds.

Nevertheless, we still hear about the horrifying stories happened via this platform. In October 2007, Micheal John Anderson killed a woman who answered his ad for a baby sitter on Craigslist. This was the first murder case involving Craigslist since it was found in 1995. In April 2009, Philip Markoff was charged with first-degree murder of a masseuse who advertised her service on Craigslist. In June of 2011, a woman bought a car on Craigslist for her daughter. After the money was transferred, she found out that the deal was a scam. The woman lost $2,900. In the same month, a woman in California who worked as a housekeeper was raped by a man. They came in contact through Craigslist. Another example of Craigslist-related crime: a man agreed to buy a cellphone from someone and when they met up, the man was robbed at gunpoint.

These incidences could have happened to anybody, on any kind of platform. I decided to use Craigslist as an example because I used the website for a few times and it was the “go to” place where I lived back then. Luckily, the only thing that came close to “a scam” for me was that the buyer failed to show up for my dinning table. The point I want to raise is that nowadays new business ideas generate all kinds of cool and useful platforms, where you can fund a project, hire a cook, buy handmade products, buy a car and so on. But sometimes the consumers, like you and me, are the ones responsible for their own money and safety. Many platforms do try to prevent scams and frauds but there is no 100% guarantee. Being smart might not be enough to stay safe in the digital world. We also need to be streetwise. These kinds of things are not being taught in school but hopefully, by learning from other people’s, or your own, mistakes, we would be a bit streetwiser.