Since March 16, Vouliwatch.gr has started its operation on the web. It is the first Greek digital platform that enables the citizens not only to familiarize with the procedures of the legislative power but also it gives them the opportunity to communicate, assess and control their elected representatives. Vouliwatch.gr, is the Greek version of a similar and already successful initiative that operates in five European countries (Germany, Luxembourg, Ireland, France and Austria), the ParliamentWatch. 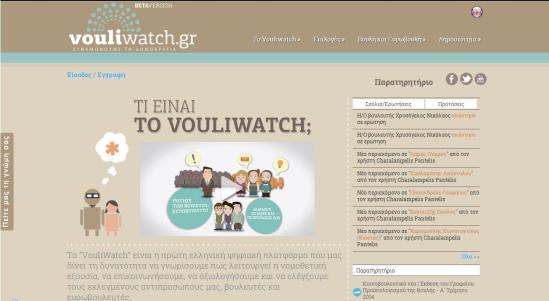 The digital’s platform main aim is to “promote public dialogue, knowledge, political participation and accountability between citizens and politicians” (Vouliwatch.gr), which will be achieved by offering to the users three options. The users can ask questions and receive replies from the representatives in the Parliament, they can promote their own ideas by making proposals, share their experiences and they can also participate on debates where the “issue of the month” will be discussed. END_OF_DOCUMENT_TOKEN_TO_BE_REPLACED