On the night of 4 October 2013, SK Telecom T1 completed a rout of analyst’s favorites Chinese Royal Club to take home the whooping prize money of 1 million $ net, but more importantly the title and bragging rights of being the world champions 2013 of the multiplayer online game League of Legends.[1] It was a night in which SKT1’s  Lee Sang-Hyeok, better known as “Faker”, produced a performance of a lifetime that assures his position in the Hall of Fame of LoL with other midlaner greats such as former Taipei Assasin’s Toys. His expert Gragas play that helped secure the first Dragon in every game, coupled with excellent lane control and mind games lead the team to victory in the sold-out Staples Center Arena (Los Angeles Lakers NBA team Arena): “We put in so much work, and we really trained well […] We expected to win.” Faker said at the end of the match. [2]
For most people, all of the above still sound like an excerpt from a SF novel, but professional video-games streamed live for an extensive audience are gaining momentum and this is mostly due to Twitch.tv.

Twitch.tv is an active co-creation platform where amateur and professional video-gamers can stream the games they are playing live and interact with viewers. According to Qwilt (a broadband measuring tool), Twitch.tv “is driving more Web traffic than live videos from Major League Baseball, WWE’s popular wrestling matches, or even the news.” [3] What’s more, Twitch.tv attracts over 45 million unique visitors a month who watch an average of 100 minutes of livestream a day [2], numbers that seem unexplainable when we imagine the target is a niche. 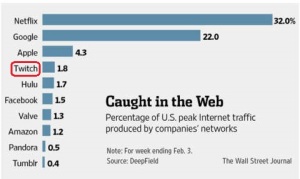 Beside individual broadcasters, the website has also made partnerships with Riot Games to stream the trending eSports championships and with Sony and Microsoft to bring Twitch.tv’s facilities to consoles, thus increasing their reach. The company earns money through personalized ads on the website and through add-free ‘partner program’ subscriptions. Through Twitch.tv, gamers also receive income through donations from their followers or brand sponsorships. The website provides the basis for what seems to be a future valuable area of business – the growing eSports scene. Through its innovative concept, the website created a new business world where passionate people without a traditional career path in sight can now have a proper ‘job’ by being professional gamers or eSports commentators.

An interesting use of the platform took place at the beginning of this year, when an anonymous Australian programmer launched a simple yet viral game which turned into what is now known as the ‘TwitchPlaysPokemon’ Experiment [4]. In this experiment, users could remotely control a Pokemon game and stream themselves while doing so instead of just watching others play. The game was a massive success, attracting over 9 million viewers, and proved the power of the crowd when 1 million participants together ‘won’ the game.

With the eSports scene being foreseen to continue growth in the near future and more and more companies being ready to invest in the phenomenon, Twitch.tv is expected to continue its sharp growth. One question remains: Is this a phenomenon that is here to stay? Or only an isolated hype? Only time will tell…