The article ‘welcome to the experience economy’  by J. Pine and J. Gilmore states: “as goods and services become commoditized, the customer experiences that companies create will matter most.

A good example of this is the Winter Efteling. The Efteling is a Dutch amusement park all focused on magic and fairytales. When the amusement park first opened it actually only had het sprookjesbos (the fairytale forest).  They expanded it with roller coasters and fairytale themed attractions like the fata morgana. Right now it really is an amusement  park for everyone, from children to adults.

Most amusement parks are opened from March till the end of October. The Efteling used to be no exception to this rule. However they changed this a couple of years ago with the introduction of the Winter Efteling. Right now the Efteling is opened the whole year, all 365 days.

With the winter Efteling you actually feel like you are walking in a winter wonderland. The whole park is decorated with Christmas trees, Christmas lights and even (fake) snow.

They have special winter attractions where you can become active as well. You can go langlaufen on a special track that is normally used for another attraction.  They also have an ice-skating rink and a snow slide for the children. At night they have a special show called Aquanura and spectacular illusions involving multiple attractions. They use a lot of lights to create these illusions which makes them even more spectacular to look at when it is completely dark outside. 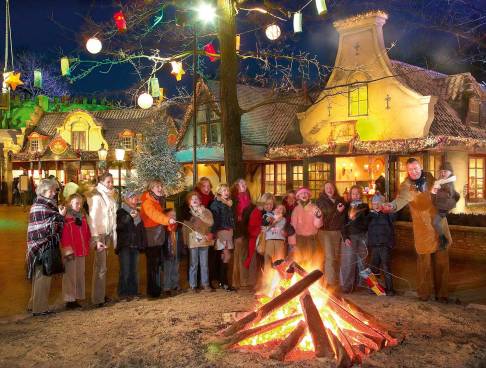 To make the experience even better they also have all kinds of different wintery snacks like hot chocolate with whipped cream, glϋhwein, pea soup, smoked sausage (a real Dutch wintery treat) and more.

By giving people this experience focused totally on the winter and on the feelings people associate with the winter they actually made it more attractive for people to visit the Efteling more than once a year. Usually a lot of people go to amusement parks in the summer when there is nice weather and you can actually enjoy a day out. This experience contradicts everything people associate with going to an amusement park by creating a world outside of the amusement park that you just want to be a part of.

Below you can see an impression of the Winter Efteling.