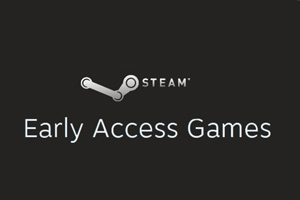 Traditionally games were fully developed to completion in house by game developers and publishers. However, this process was time consuming and very costly and for independent game developers this was not really an option.  In recent years these game developers have increasingly used the ‘Early Access’ method of game development. Interested gamers can pay to have early access to a game which is offered to them in a playable state, but where the features are not all finished and the game may contain d in return may be given the final release of the game or extras such as bonus features and their name in the game’s credits

One website offering early access to gamers is ‘Steam Early Access’ which was launched in March 2013.  It started with 12 titles in various stages of development that Steam users could purchase and play.

Platforms like Steam give developers access to crowd sourced funding, similar to Kickstarter. This makes game development less costly but also allows developers to take more risks in the titles they chose to develop.  Steam gives developers direct access to devoted fans and asks them to help fund games that traditionally would not be made.  The game ‘Spacebase DF-9’ was recently put on an early access platform and two weeks after the game’s release the developer had recouped its initial investment amount of $400,000.

Also through early access consumers contribute to product innovation and development; their feedback can help the developer tune the game’s direction, art, and software mechanics before final release.  This also reduces the cost of development, avoiding the costs of game trials. In addition, the finished product is likely to be more pleasing to the consumers as they have contributed to its design.

While traditionally game development was shielded in secrecy, early access now grants those that are interested access to the design process.  There is a risk that new ideas could be stolen by other developers.  Also it is challenging for developers to incorporate ideas of users but still maintain control of the development process.

Buying early access is also fairly risky for the consumer.  Fans may be encouraged to buy early access because the games are usually offered at a lower price than a complete game.  However, they could end up being disappointed as their first impressions of the game are of an unfinished product.  The state of the game can vary with some games in a good playable state, while others are still full of bugs.  Further there is also a risk that the game may never reach completion, in that sense consumers that buy early access should view themselves more as investors than consumers.