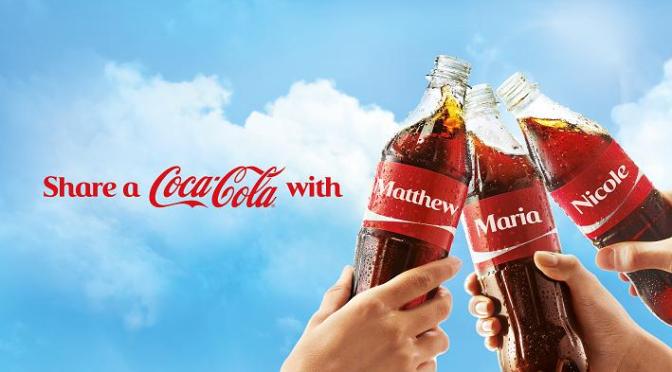 One more successful idea from Coca-Cola surprised the consumers last summer! “Share a Coke” with your friends, family and loved ones! The message was spread and Coca Cola increased its sales and website traffic rapidly.

The campaign started in 2011 in Australia with the classic Coca-Cola and it was mostly focus on the young ages between 18-25. The results were astonishing,  youth consumption was rapidly increased and the traffic in Coca-Cola website increased by 870%. Two years later in UK the campaign launched again but this time all the three types of Coca-Cola were available. 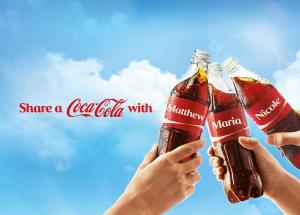 The most common names were printed on bottles and cans which were available in supermarkets. The next step was to transform the campaign more direct and personal. In selected spots consumers were able to create their own products with a name of their choice. Long human cues in several cities and people holding the “special” bottle or can contributed effectively to the launch of the new Coca-Cola campaign.

In September, after the end of the tour, Coca-Cola still offers the opportunity to consumers to “Share a Coke”. The campaign in social media continues and individuals still have the opportunity to create their own online bottles and share it. For example “Tweet your photos @cokezone with #shareacoke” or through the facebook page.

Coca-Cola is a company which follows a specific strategy, to connect consumers’ personal experiences with its products. Advertisements related to family moments or Christmas time constitutes usually the concept. Summer 2013 was definitely a period marked by the logo “Share a Coke”! The main goal was to persuade consumers to share the experience of drinking a Coca-Cola with favorites such as family, friends and partner. The chance of creativity and the appearance of names in the package attracted individuals to participate in the campaign. The company succeed to offer a product affordable and personal and simultaneously to make everybody fells unique and special.

Once again Coca-Cola adapts to the market environment and proves that the well-structured marketing strategy which follows can be successful. Combining the traditional with the modern and challenge the customer to participate actively, not only increased sales but also generated a special relation between the company and customers.